Which artist leads the world in 2019? Who is the new face of the hit?

2019 has passed, massive art works have changed hands, and the art market is moving forward in a changing environment. Data have recorded the ever-changing moments and witnessed the traces of auction history. Some artists have earned a global reputation in the market with unshakable positions; some have risen to the top and become dark horses in the competitively changeable circumstances.

In terms of proceeds, 20 artists entered the world’s US$100-million artist club in 2019! This is undoubtedly a new milestone in auction history. Let ’s experience together with ArtPro the brilliant speed and passion of top artists at the auctions! 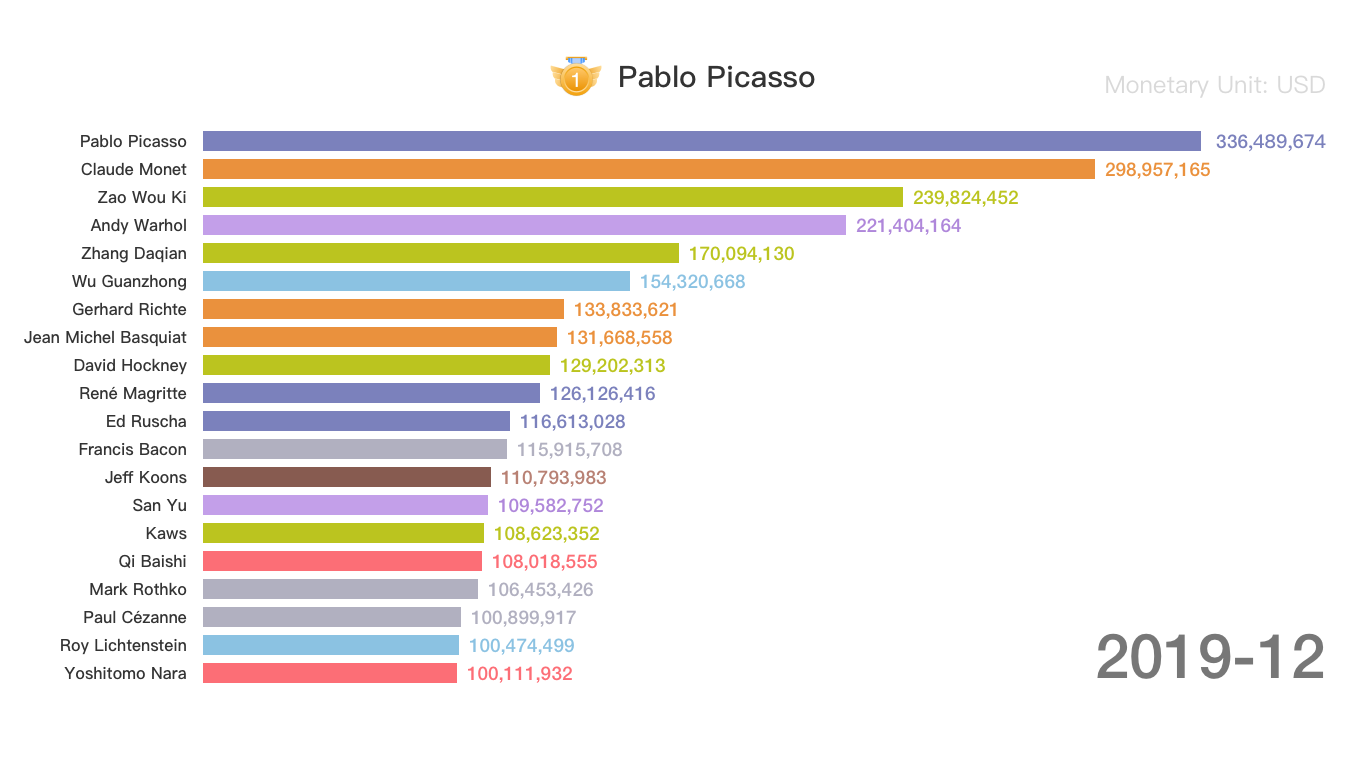 Tips: Please turn the phone to the horizontal screen and click to watch the video for the best view.

Condensing 12 months to 48 seconds is not only a race of time, but also a top contest of power between artists! You can clearly feel their status and popularity in the auction market in 2019! 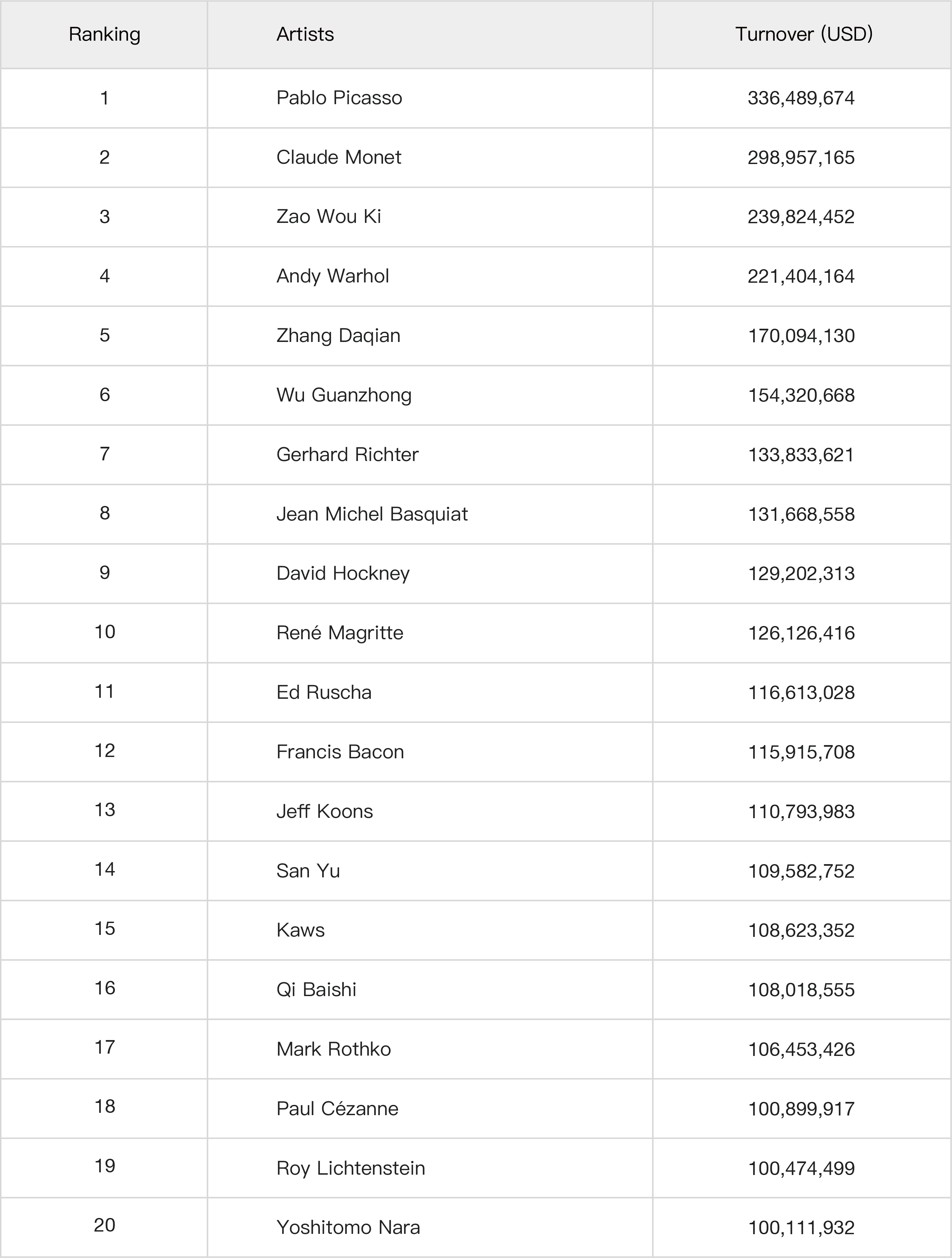 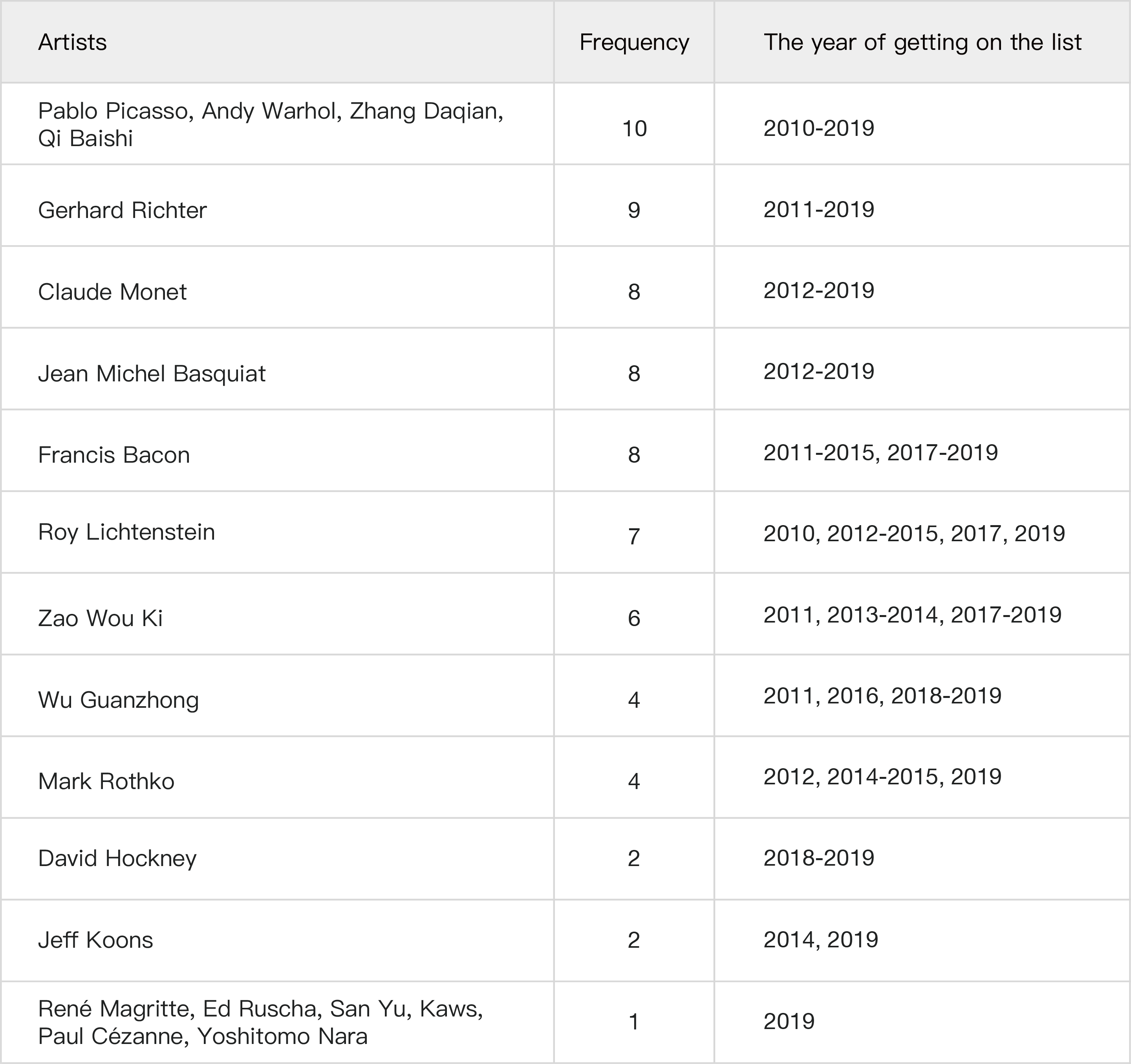 Apart from special cases, the 100-million proceeds mentioned below refers to US$100 million.

It is worth noting that in the 2010-2019 decade, 6 artists entered the world's 100-million artist club in 2019! They are René Magritte, San Yu, Ed Ruscha, Kaws, Paul Cézanne, and Yoshitomo Nara! (in order of left to right, top to bottom in the picture below) In addition to new comers, Paul Cézanne made proceeds of over 100 million in 2019, the first time in his ten-year record. 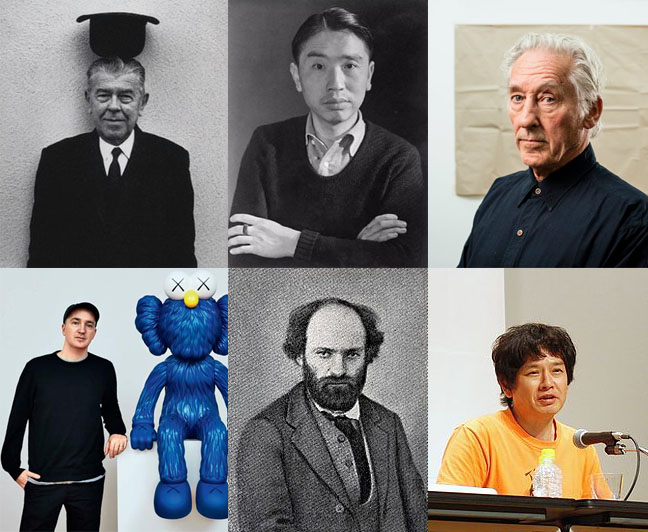 6 artists with over 100-million proceeds

René Magritte, a surrealist artist from Belgium, kept topping the list since his works first appeared in February. In November, he reaped over $ 100 million.

Kaws's works began to be concentratedly auctioned in April and May.The Kaws Album (the lot on the left in the above figure), with the hammer price of over HK $ 100 million, pushed him up into the world’s TOP 20 list. He had an extraordinary performance in October and November, and concluded the year of 2019 with over US$100 million!

Paul Cézanne got on the TOP list in February. In May, his Bouilloire Et Fruits (the lot on the right in the above figure) was sold for US$59.295 million, creating the most expensive fruit of the year! In 2019, Séchaud entered the 100-million artist club with a relatively steady performance.

Ed Ruscha’ work Hurting The Word Radio #2 (the lot in the middle in the above figure) was sold for US$52.485 million in November, helping him jump into the TOP list in November!

With nearly HK $200 million and over HK $300 million respectively, NU and Five Nudes evoked sensational moments at the auctions in October and November, making San Yu a rising star in the 100-million artist club in December.

Do not forget Yoshitomo Nara! At October auctions, he continuously renewed his personal records and created spectacles at the auctions! His Knife Behind Back made a legend of nearly HK $200 million in October. 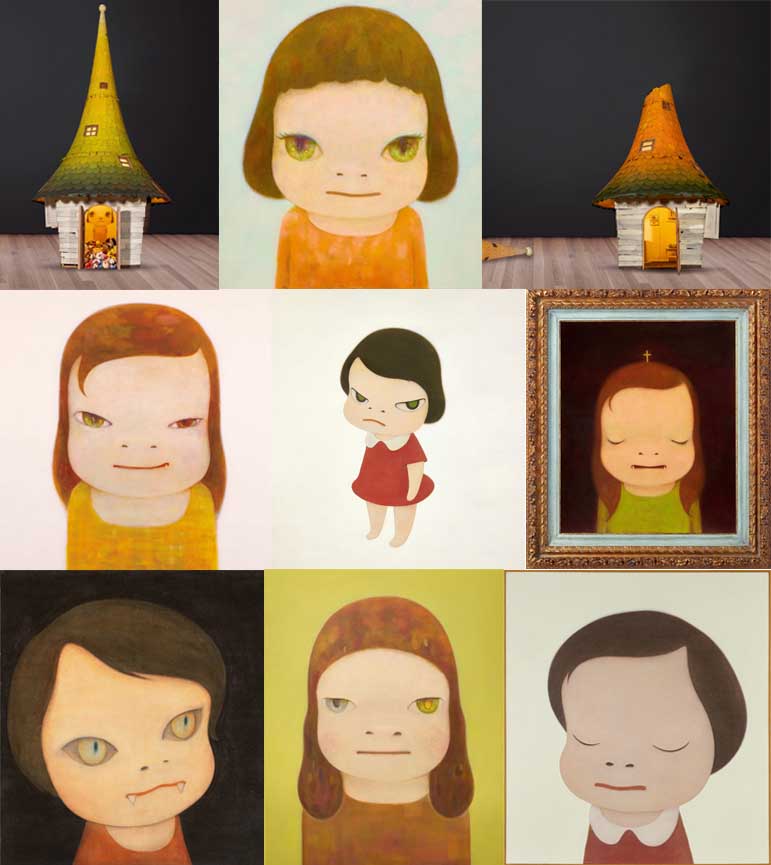 Yoshitomo Nara had 16 works priced over US$1 million each in 2019, becoming the most expensive Japanese artist. In November, his total proceeds surpassed that of Yayoi Kusama and mounted to the world TOP 20. In December he entered the world’s 100-million artist club! 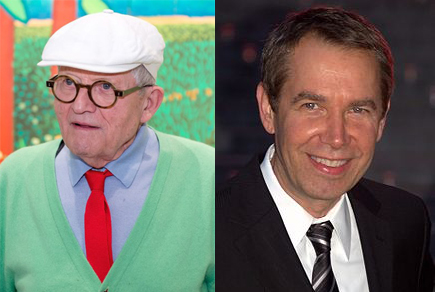 In 2018, Portrait Of An Artist (Pool With Two Figures) surprised the art world with a transaction of US$90.3125 million, making David Hockney the most expensive artist of 2018 among living artists then. He made a total of over 200 million in 2018!

In May 2019, Jeff Koons's sculpture—a stainless steel rabbit, shot up to US$91.075 million, breaking the record set by Hockney! After 2014, Jeff Koons returned to the 100-million artist club for the sky-high priced rabbit.

David Hockney remained extremely hot in 2019. In March, the double portrait Henry Geldzahler And Christopher Scott (the left lot in the above figure) was sold at￡37.66125 million. In November, the back-view painting Sur La Terrasse (the right lot in the above figure) contributed US$29.50125 million. They became Hockney's second and third most expensive works respectively. David Hockney's total proceeds in 2019 surpassed those of Jeff Koons.

In the past ten years, some artists, as the club's bigwigs, have supported half of the auction market with their actual strength. In 2019, Pablo Picasso, Claude Monet and Zao Wou Ki occupied the top of the global pyramid.

TOP 1 Pablo Picasso: a ten-year veteran and the final champion

On the list of 100-million transactions in 2010-2019, Pablo Picasso retained a position for ten consecutive years. He is not only a genius in the art world, but also a veteran in the auction world! In 2019, he ranked second in May, rising all the way with overwhelming advantages and surpassing Monet. Picasso finally won the championship in October and became the world's “best-selling” artist of 2019. His strength proves his status in the world!

TOP 2 Claude Monet: a winner for eight consecutive years and a warrior at auctions

In the video above, we can see that Claude Monet ranked second in February and fourth in March and April. In May, his Meules sold more than US$110 million, making it the most expensive artwork of 2019 while also making Monet lead the TOP list!

Monet kept the leading position for the next four consecutive months. While competing with Picasso, he was far ahead of other artists. In the past ten years, Monet's proceeds exceeded 100 million in each of eight consecutive years. In 2019, he became the “second best-selling” artist of the year with proceeds of nearly 300 million.

TOP 3 Zao Wou Ki: a strong rival for 6 years and a winner of third place

In 2018, Zao Wou Ki ranked third in the world with more than US$300 million and became a bigwig in the auction market. After the auction market ushered in the peak season in March 2019, Zao Wou Ki took the lead and continued the championship in April. Although he did not break his personal record in 2019, he reaped nearly US$240 million and won the third place in the world! In the past ten years, Zao Wou Ki had proceeds of more than 100 million for six years each.

ArtPro data indicate that like Pablo Picasso, the other three artists Andy Warhol, Qi Baishi and Zhang Daqian have been regulars at the 100-million artist club for ten consecutive years, competing with each other.

As a fixed star in the art world, Jean Michel Basquiat achieved proceeds of more than 100 million in each of 8 consecutive years; Gerhard Richter won for 9 consecutive years! Roy Lichtenstein and Francis Bacon had proceeds of more than 100 million for 7 and 8 years respectively; Mark Rothko re-entered the list 4 years later; Wu Guanzhong also had splendid achievements in the past two years!

Let’s look back at the glorious 2019 and look forward to the promising 2020. What excitements and miracles will the world’s 100-million artist club bring? How will these 20 artists do in 2020? ArtPro will witness a new and spectacular moment with you.