【Feature - Market】European, US and Asian art markets reacted differently in the past crises.

We have to accept the general condition, yet there’s still way to crest success from a micro perspective.

Half of 2020 has already slipped away. The global economy is about to enter the annual second half, and the control of COVID-19 has gradually been strengthened. Major auction houses are gearing up for the long-delayed spring auctions, since the freezing winter will eventually pass. In the rest of 2020, how is the global art going? With review and reflection, ArtPro will continue to gather experiences from the global economic crisis. After our previous【Features – Opening】, we plan to take market as our perspective, and explore how Europe, America and Asia have gone through the storm and turbulence in the past, hoping to inspire the current global art market.

Part I: Where are the opportunities in the European and American Markets in the teeth of the storm?

Overall, the top half of the graph represents the price index of Europe, America and Asia, while the bottom half shows the total turnover lines. Three lines go up and down, reflecting the fierce competition and rivalry of the market. The financial crisis in 2008 has brought extraordinary turbulence to Europe, America and Asia, as we can see from both the price index and the total turnover. From the price index, the soaring figures of Asian price index shall serve as a good comparison against the relatively low figures of Europe and America in 2008. Again, now a sign of decline reappears. The total turnover indicates that American art market has suffered the brunt and experienced a downward trend since 2007, as it’s the “epicenter” of the 2008 financial crisis. Due to the time difference in spreading and the market lag, the European downward trend appeared in 2008. After suffering two-year’s consecutive low level of total turnover, the global market did not recover until 2010. Confronting crisis, Europe and America show linkage in ups and downs, which is inseparable from their close and inextricable market relations. European and American Classics tend to be stable, Modern and Contemporary Artists beat the Index

The world’s classic artists’ market performances differ from person to person, and that’s the fun part of art investment exploring value range in changes. Claude Monet experiences a synchronous decline in S&P500 and ArtPro100 during the 2008 crisis, but the later growth is satisfactory; Marc Chagall achieves a good mark at the beginning, but is overtaken and left behind by S&P500 in later stage. Despite that the classic artists have the advantage of a stable market, yet their price index still fluctuates with the overall environment. For a long time Vincent Van Gogh’s price index is lower than ArtPro100 and S&P500, but it surpasses the former two after 2014. We can tell that under the law of the market, any success is zigzag upward. 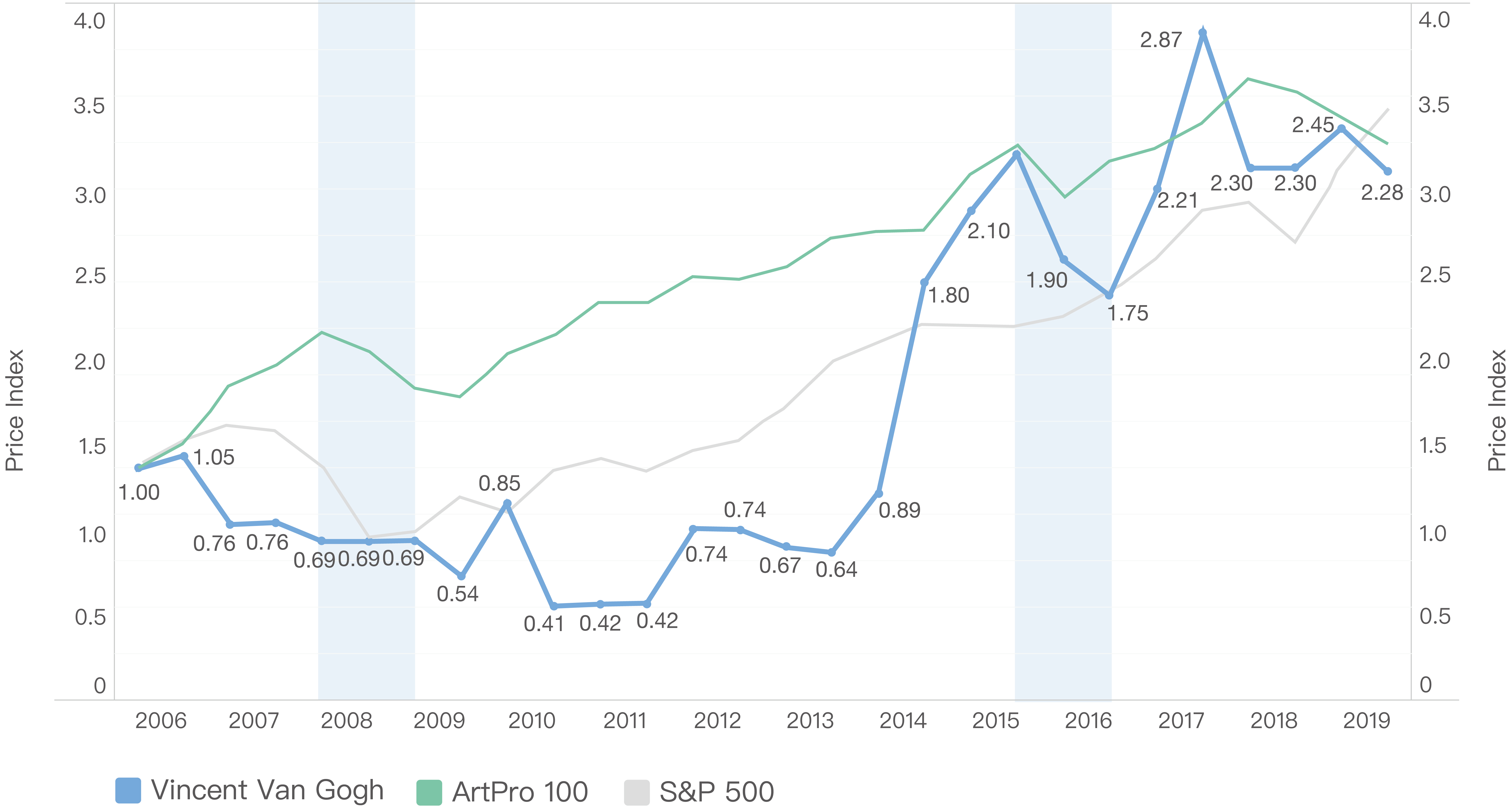 Vincent Van Gogh (stays low at the beginning, and turns the tide later)

While the classic artists drive stable, the modern and contemporary artists as the latecomers are also quite brilliant. Artists like Jean-Michel Basquiat、Günther Förg all show their steady resilience against the 2008 crisis. By 2019, the price index of these modern and contemporary artists has increased by about 10 times, bringing a promising future. 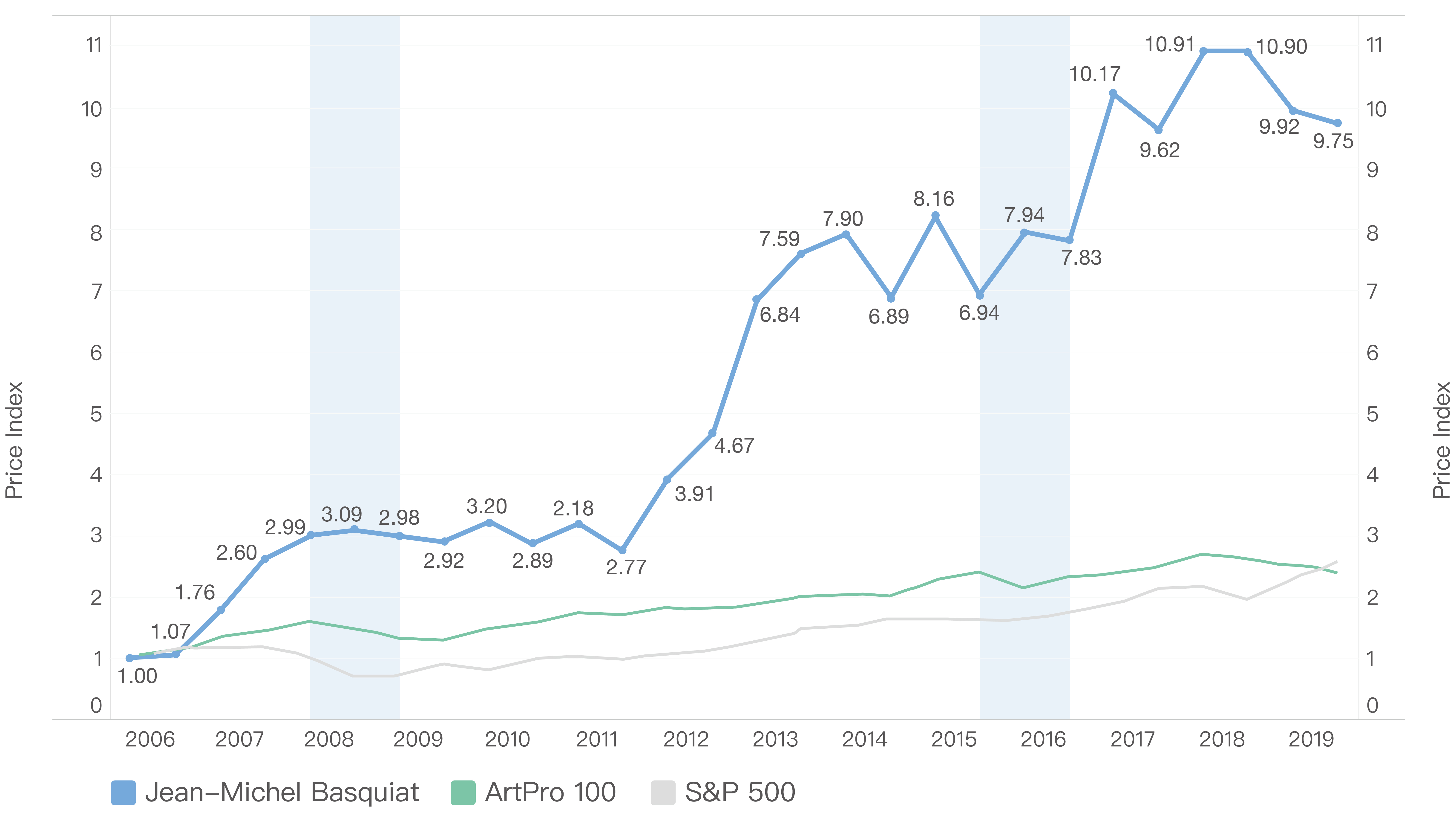 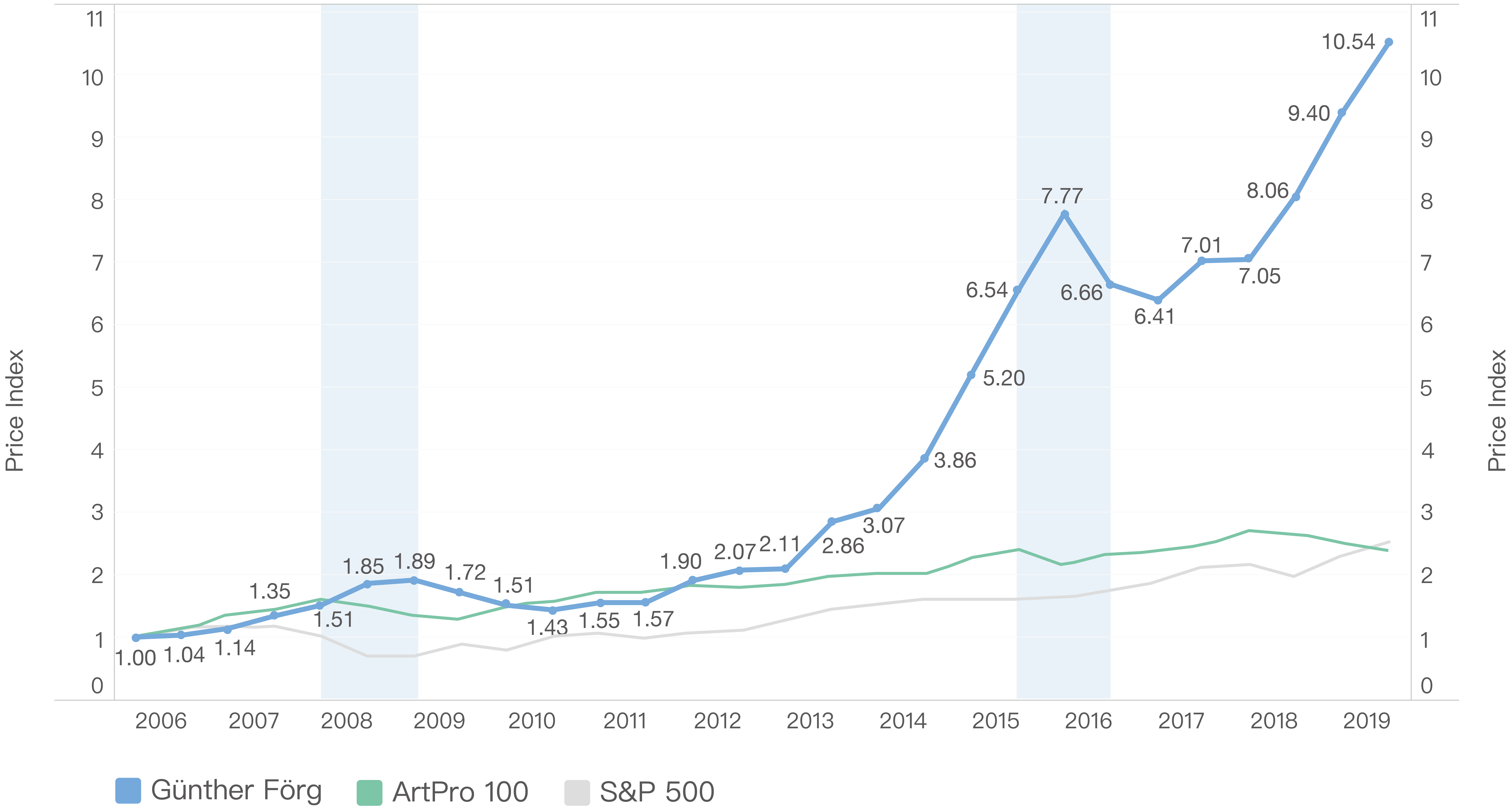 Part II、Asia, a Rising Star in the Crisis! Among the Domestic Artists, who will take the Lead?

The 2008 economic crisis has not weakened Asia. On the contrary, it promotes the rise of Asian price index, which soars all the way up, and continues to rise today. Its capability of self-adjustment and economic resilience shall not be underestimated.

Due to regional divergences and market personalization, the trend of Asian market differs from that of the European and American markets. The Asian Artists all flourish. No matter experienced old masters in painting and calligraphy field, or latecomers in modern and contemporary art, there is no drastic downward trend. The two forces together support Asia market to win a place on the international stage.

With the rise of Asian auction market, Asian modern and contemporary artists are attracting increasing attention from the international art circle. “Zao Wou-Ki fever” has been a hot fashion pursued by collectors. Despite a slight fluctuate, yet his price index is in an overall upward trend. The steady and stable market trend deserves the title of “the leader of the auction field”. Yoshitomo Nara started later than Zao Wou-Ki, began to rise rapidly since 2018, and became “the most expensive in Japan” in 2019, with a splendid future lies ahead.

On the whole, Zao Wou-Ki and Yoshitomo Nara all largely surpass S&P500 and ArtPro100, with impressive performance. 2. Chinese Calligraphy and Painting Promotes a Unique Asian Art Market Different from that in Europe and America

Driven by mainland China, Asian market presents uniqueness different from the European and American market. As an art category that cannot be neglected in the Asian market, Chinese painting and calligraphy has always occupied an essential position, and has considerable power to resist the crisis. The well-known names as Qi Baishi, and Zhang Daqian all enjoy a wide range of appreciators and large numbers of works on auction list, and therefore keep constant heat in the market. In the market fluctuates, calligraphy and painting artists have shown extraordinary ability to resist the crisis. 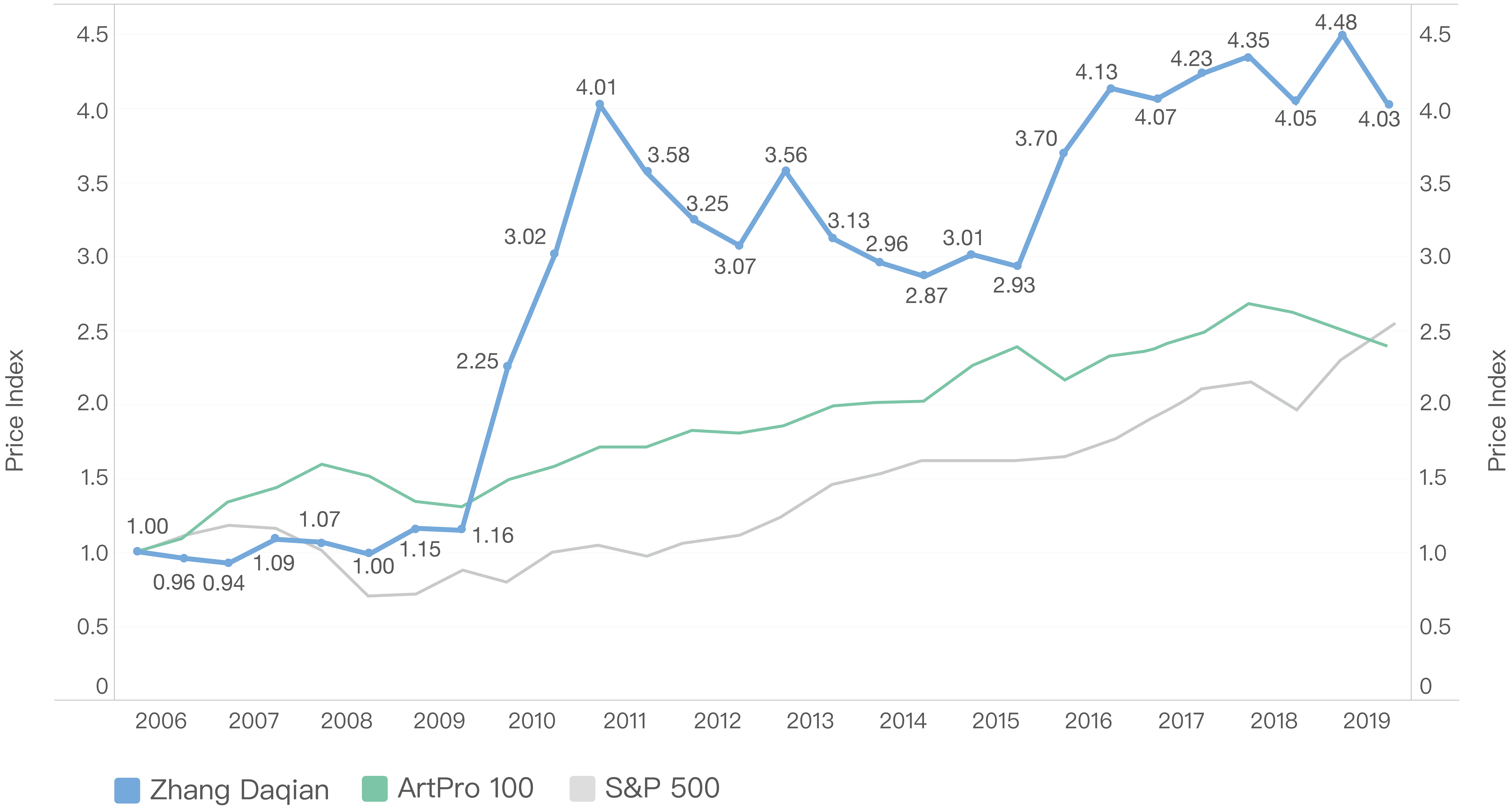 Among world Top100 before 2008, European and American took the absolute advantage, while the Asian auction items only occupied a tiny proportion. In 2009, the number of Asian lots increased rapidly, and achieved the first peak in 2011. In 2016, as the number of European and American lots declined simultaneously, Asian artworks performed well and witnessed a second growth peak, and today it is still on the rise. 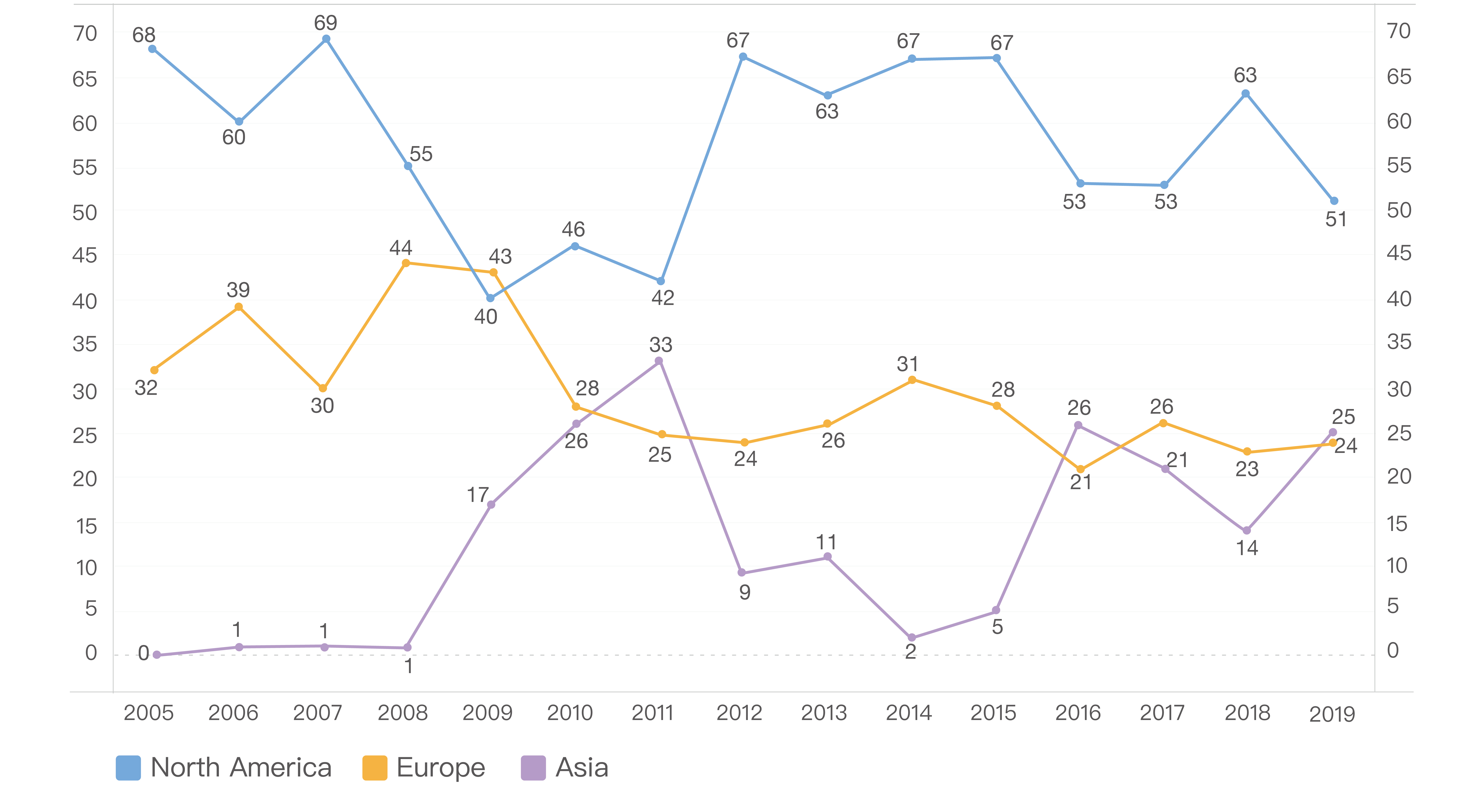 The number of Top100 distributed in Europe, America and Asia

The market is constantly changing. It not only may disobey your expectation, but may throw several black swans off guard as well. Thus we have to accept the overall condition, and crest success from micro perspective. Confronting a global turbulence of the art market, we shall seize the opportunity to ride the tides. Under crisis, what kind of art works should art lovers and investors focus on? What kind of auction item owns the ability to resist the risks? When will you get the most out of it? As the art market closes a door in the face of the recession, ArtPro is going to open a window for you in our next feature [【Feature - Returns】Capture the bottom value range, and focus on the star lots with excessive returns].

Never stop providing high-quality content. Clients who are interested in more analysis reports of art market can preview the market reports of your concern in another way. Based on the auction data of the global art market over the years, now at this stage ArtPro is giving professional art market reports for free. According to our users' interest, we're digging deeper into the market changes of artists and analyzing the changes in the art industry. Touch "Get Report" at the bottom left to get the report instantly,or you can continue to follow ArtPro updates and stay tuned for more highlights.

Related Items
【Features-Opening】There is a good opportunity for a rebound in the art market!
8 Fri 2020, 18:00