In Q1 2020 which artist is the king of the auctions? What are the record-breaking deals?

Artworks have been a carrier of beauty since ancient times, transmitting energy in a silent way. As a symbol of wealth, they promote economic development for each transaction. Since 2020, many auctions have been hosted in various regions of the world, presenting the masterpieces from many art masters. 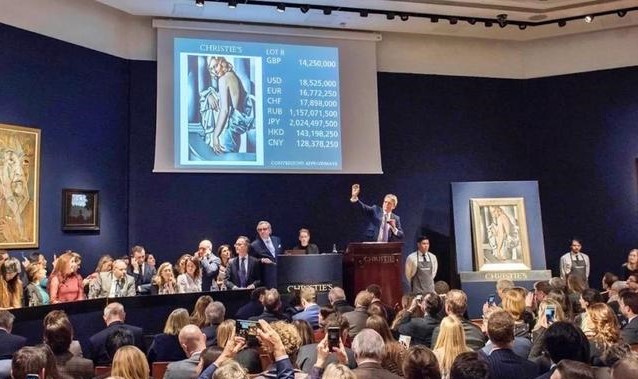 The scene of Christie’s Evening Sale

Recently, COVID-19 outbreak has been sweeping around the world, affecting the whole art world and hindering the spring auction series. Although in such a severe situation, the art auctions in the first quarter of 2020 have come to an end. In the auctions closed, which artists have topped the list? Which artists caught up silently to break the record? As your personal art specialist, ArtPro will bring you some good news during this special period. 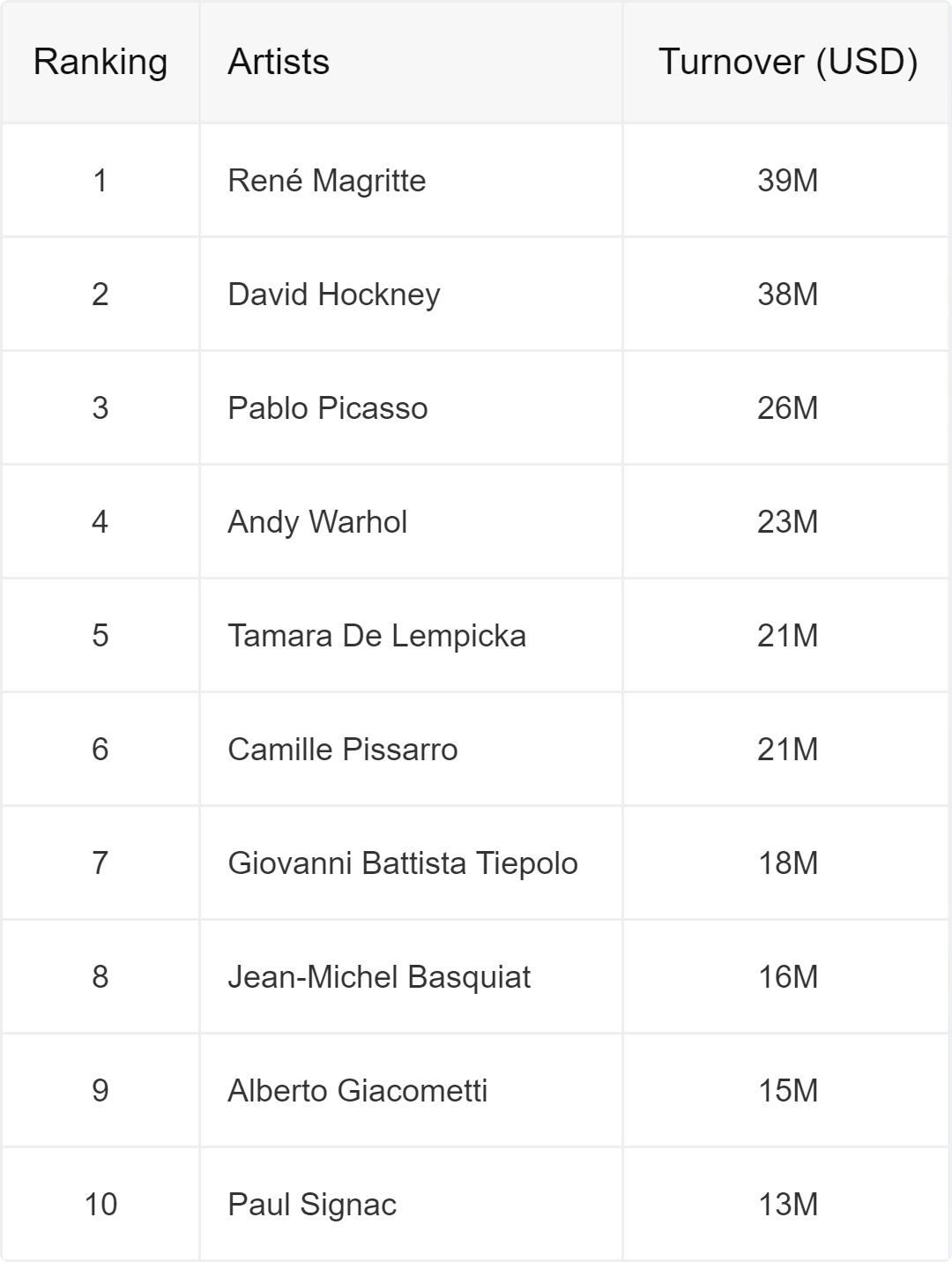 In Q1 2020, the crown in the art world was taken by Belgian surrealist René Magritte with a turnover of more than USD39 million! Among them, more than USD24.55 million was contributed by the oil painting A La Rencontre Du Plaisir. British artist David Hockney is still going strong, the swimming pool-themed The Splash fetching more than USD31.27 million.

Veteran artists Pablo Picasso and Andy Warhol went under the auction，achieved USD26 million and USD23 million respectively. One of female artist Tamara De Lempicka’s oil paintings surprised the market when it fetched more than USD21.11 million. Up to now, the evergreen artist Jean-Michel Basquiat ranks eighth in the world. The Impressionist painters Camille Pissarro and Paul Signac, as well as muralist Giovanni Battista Tiepolo and sculptor Alberto Giacometti are among the top 10 in the world with their high-priced works.

Several artists got off to a flying start in 2020, setting a new personal record

Some artists have come out on top in the world in Q1 2020, and many have set a personal record! Let’s see how many of them you are familiar with.

Polish female artist Tamara De Lempicka’s works have been sought after by fashion stars, Hollywood stars and photographers. She is known as the extraordinary female of the 20th century. Even the sexy goddess Madonna is her fan. Starting in 2018, Lempicka has been realizing record-breaking prices for three consecutive years. And by 2020, she has even speed up to break her records. 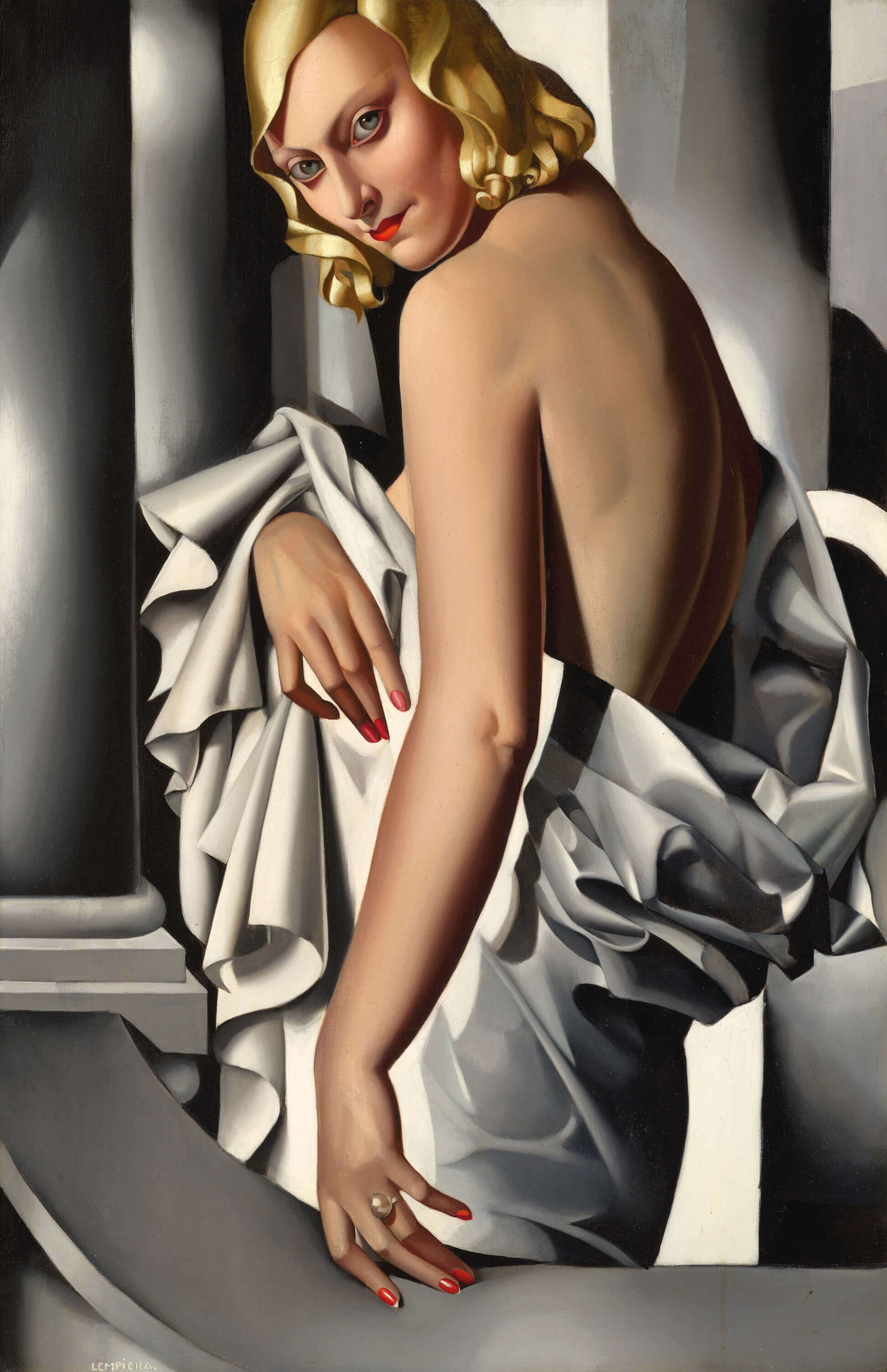 Tamara De Lempicka is famous for Art Deco and her works are highly identifiable. On February 5th, the oil painting Portrait De Marjorie Ferry sold for the top price of £16.28 million in Christie's London, breaking its record set in Sotheby's New York three months ago. De Marjorie Ferry is a Cabaret singer in Paris, and her newly married husband, a rich financier commissioned Lempicka to create this gorgeous portrait in 1932. In the portrait, blue-eyed and golden-haired De Marjorie Ferry with blazing red lips wears gorgeous fabrics, noble and sexy.

Giovanni Battista Tiepolo is one of the most important Venetian artists in the 18th century. He has painted a large number of murals and ceiling frescoes in Venice Milan and other places which are free and easy, colorful and splendid. Many of his works have become enduring and unsurpassable models in the history of European art. 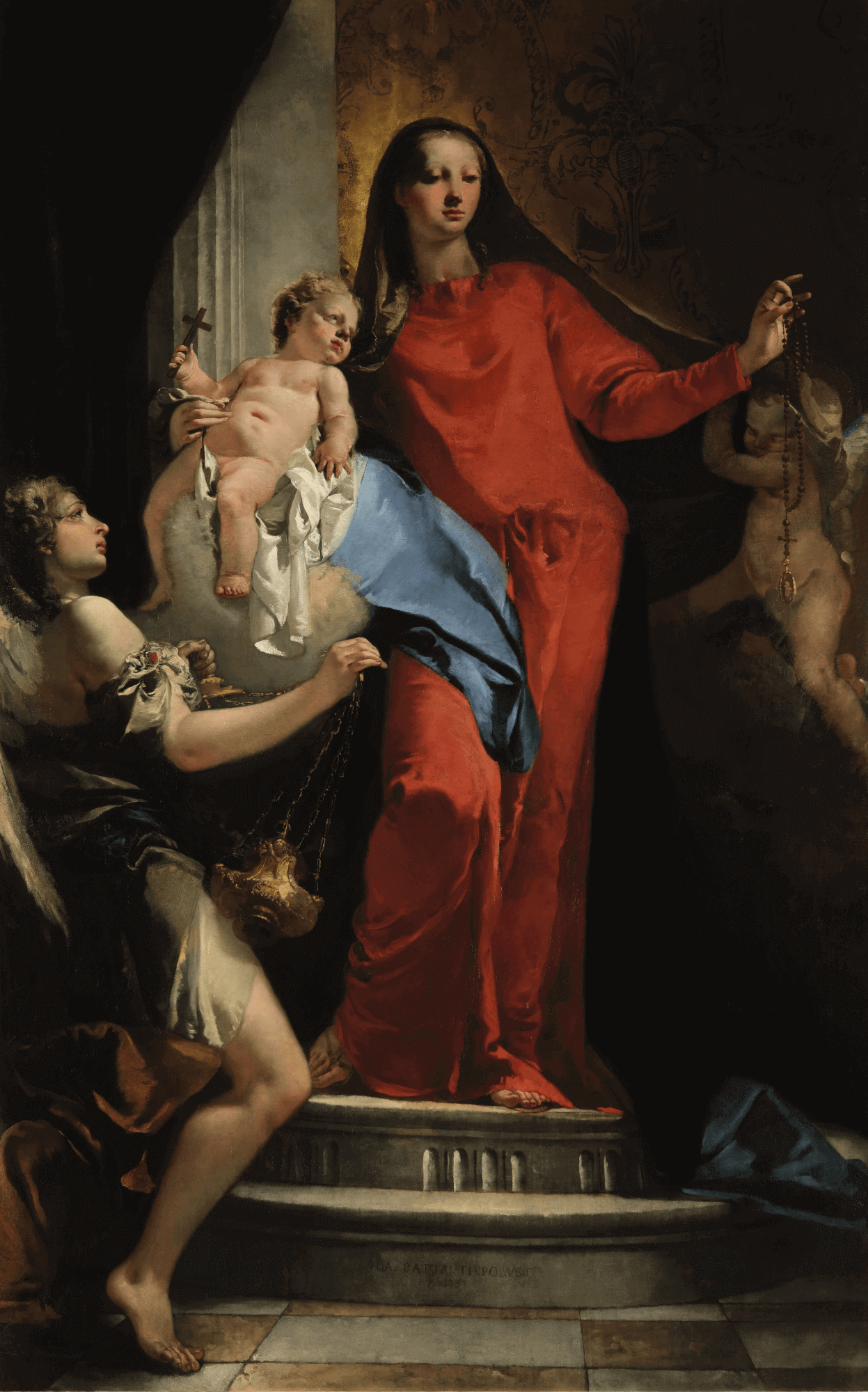 On January 29th, his work Madonna Of The Rosary With Angels sold for USD17.349 million in Sotheby's New York Master Paintings Evening Sale, setting a record price for the artist at auction. The large noble painting in bold colors was the early work of the artist. It has changed hands among many well-known collectors for many years as one of his most important masterpieces in private collections. His altarpieces in the same period are mostly collected in famous churches and museums around the world.

Born in Berlin in 1893, George Grosz’ s paintings are usually full of biting satire. In particular, after the outbreak of the First World War, he often used his paintbrushes to expose autocracy and attack social corruption, reflecting the brutality and terror of the war. Behind the exaggerated paintings are stinging satire. 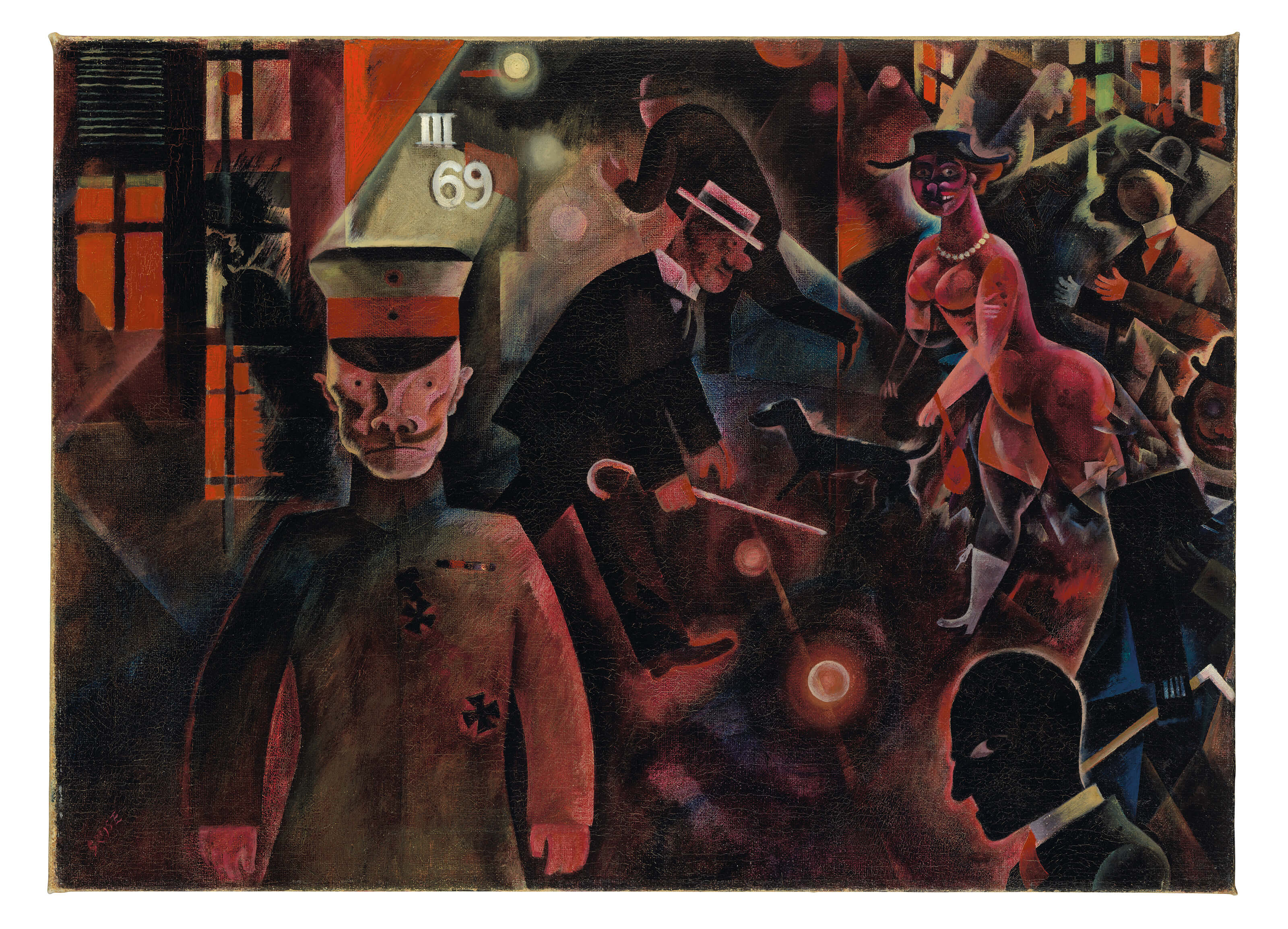 On February 5th, Gefährliche Straße sold for £9,740,250 in Christie's London, achieving nearly 1.5 times of the pre-sale high estimate price. Berlin was a city of decay and depravity in early 1918. This painting captures the moment of Berlin’s moral decay and the society in chaos. It was created by Grosz a few months before the end of World War I. Grosz, from spring 1917 to November 1918, executed a total of about 20 paintings on the theme of Berlin’s night. This work survived has become rare and of great historic value. Among the series of works known to have survived, 6 are now collected in major museums and 4 are confirmed in private collections. This never-before-auctioned piece appeared after being preserved by a collector for nearly 50 years which is regarded as the best work in private collections.

French painter Jean Metzinger is one of the founding members of the Cubism movement. From 1900 to 1904, his works were influenced by the Neo-Impressionists, and then he moved towards Fauvism and Cubism. In 1910, introduced by artist Robert Delaunay, Jean Metzinger met many Cubist. In 1912, he and Albert Gleizes together wrote important early works of Cubism. 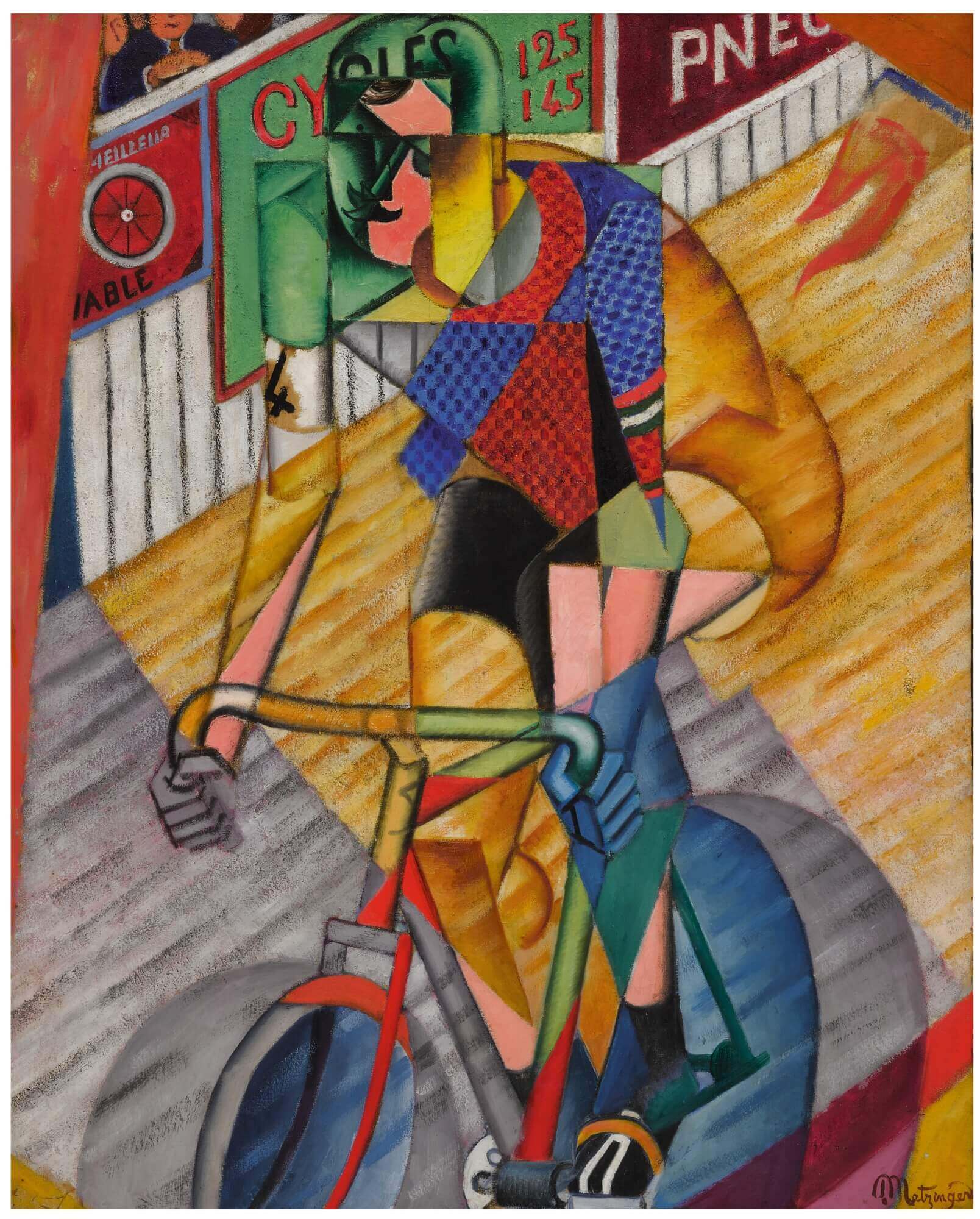 After Cubism was developed by Pablo Picasso and others, it was carried forward by different groups of artists. The Golden Section is one of the groups. In 1913, Jean Metzinger became a member of the Golden Section. This colorful oil on canvas was executed in 1912, in the important period of the artist’s career. Le Cycliste is a representative cubist painting. Through its multi-dimensional depiction, viewers are able to enjoy the scene in the painting. It set a new record for Jean Metzinger when it fetched £3.015 million. 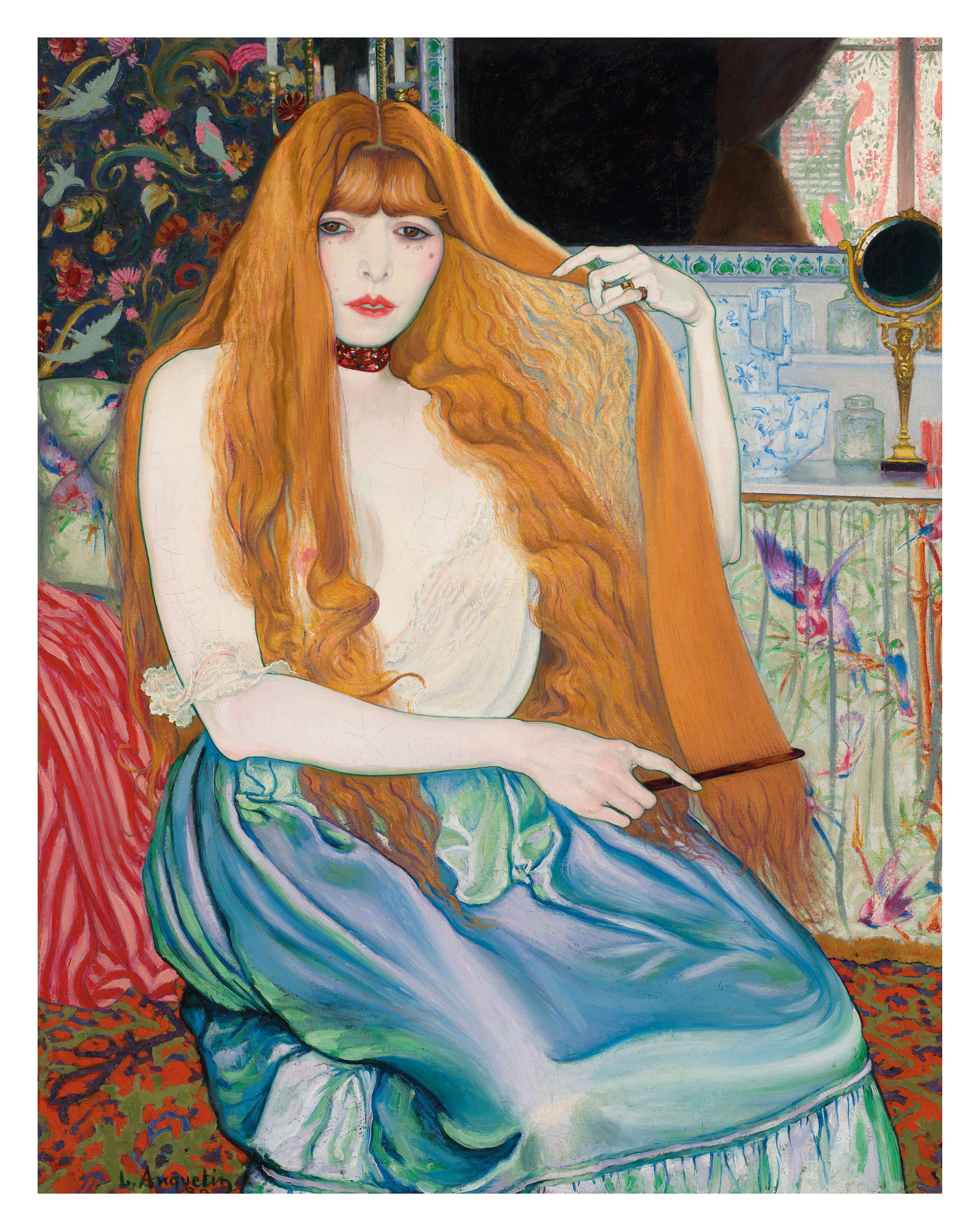 Painted in 1889, the painting is in different tones among the closed outlines. The black outline and the painted color naturally fit. The oil on canvas in warm tones depicts that a woman in the bathroom draws a brush through the long hair and the texture of her long hair is clearly visible, perfectly presenting a demure and elegant woman. On February 5th, it sold more than three times of the low estimate price in Christie’s London, setting a record price for the artist.

Günther Förg is a leading light in the German art world, who produced paintings, sculpture, photographs and installation artworks. As a pioneer artist in the transition point of modern and contemporary art, his works have been exhibited in Europe and even around the world. In 2018, Günther Förg was exclusively represented by the mega-gallery Hauser & Wirth. In February 2020, Günther Förg’s vivid and vibrant work Untitled broke his personal record set in Sotheby's New York three months ago.

From late 1980s to early 1990s, Günther Förg was at the height of his career, and the lead paintings created during this period are his most popular series in the art market. Many art museums and galleries have had special exhibitions or special display for his lead paintings, and many works have been “in museum collections only”, which are currently hard to buy in the market. As soon as the above lead painting, executed in 1990 appeared at auction, it set a new record for Günther Förg. In addition, another work Untitled appeared in the same auction became Günther Förg's third priciest work.

Henri Hayden is a Polish Jewish painter. He moved to France in 1907 and became famous for his cubist style. His works are held in several major museum collections worldwide, including the Tate Modern in London, The Museum of Modern Art in New York and Centre Georges Pompidou in Paris. 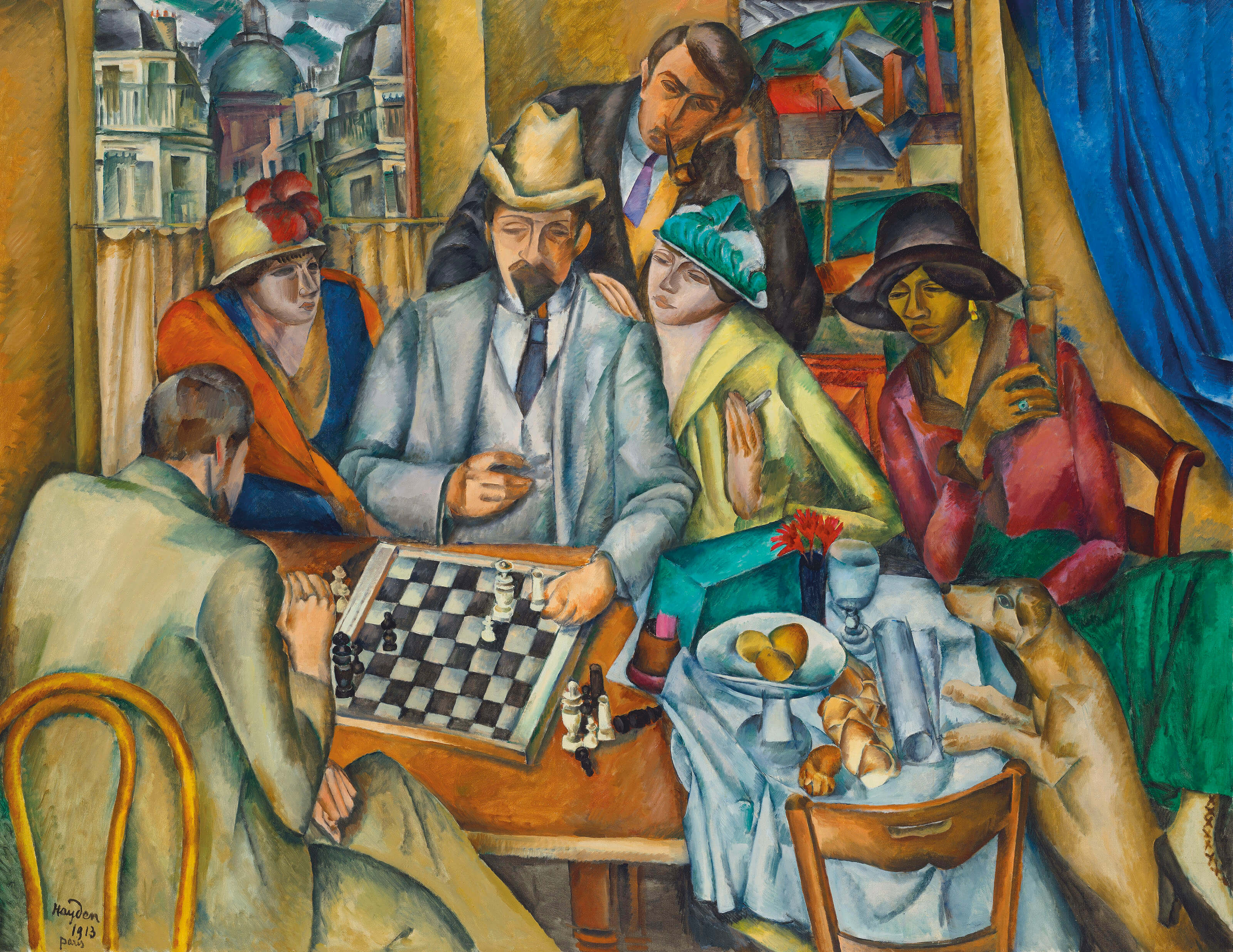 Painted in the critical period of his career in 1913, this masterpiece is exquisite and colorful. The painting presents a scene of people playing chess in a cafe, reflecting inclusion without borders and implying the anxiety of many foreign artists for their arrival in Paris. On February 6th, the masterpiece took top billing in Christie’s London Impressionist & Modern Art Day Sale. Before then, Henri Hayden's most expensive work appeared in 2011.

On January 29th, Sotheby's New York held Master Paintings Evening Sale, featuring a series of masterpieces of European art from the 14th to 19th centuries, including the works by renowned Dutch painter Dirck Van Baburen. Baburen enhances the dramatic expression through typical light and shadow contrast, but today his paintings are few in number. 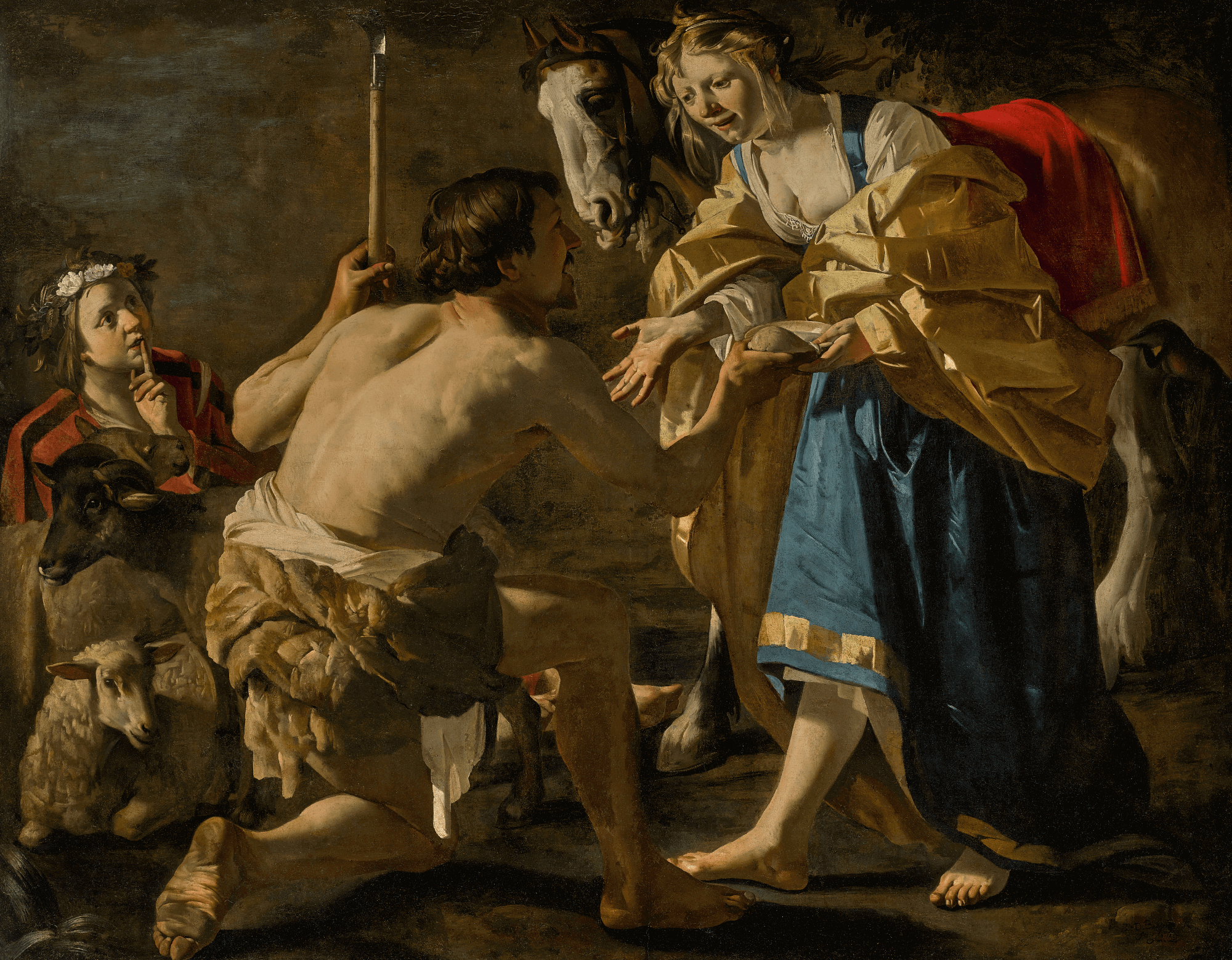 This work was influenced by Michelangelo Merisi Da Caravaggio, the father of Baroque art. It is based on the 17th century Dutch popular drama, depicting a story that Granida, the daughter of the King of Persia has lost her way while hunting and fallen in love with Daifilo. This painting is the earliest treatment of this subject in Western art, reflecting the style in the period.

In addition to the eight abovemetioned artists, many other artists such as Igor Mitoraj, A. R. Penck, Tschabalala Self, Billy Al Bengston, Kenny Scharf and Simone Leigh have also set their records, proving more artists are emerging silently.

We attached the table of 20 artists with record-breaking deals and their turnover below. 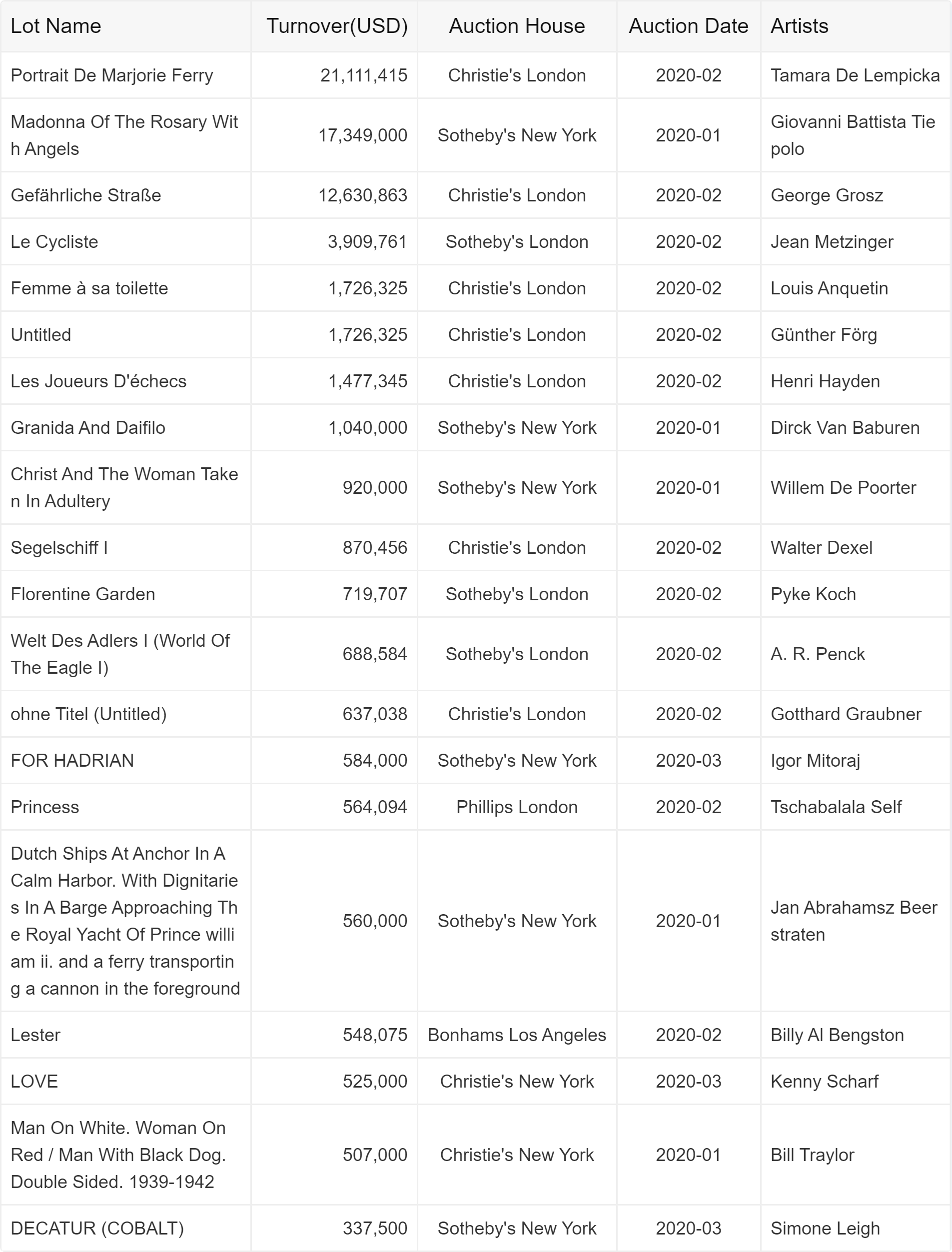 20 artists and works with record-breaking deals

From the data changes, we can tell the performance of the leading artists in the first quarter of 2020 and the rise of new artists. Under the severe influence of the current global outbreak, the art auction market is also confronted with huge challenges. What can be seen is that people are still willing to buy artworks at a high price under such difficult circumstances, which is pleasantly surprising. Every wall is also a door. Only by finding opportunities in chaos can we better prepare ourselves. How is the art auction market going to develop in 2020? And who will surprise the market? ArtPro will follow it together with you.