Opportunities can only be seized by people who know how to seize them.

It seems that the beginning of 2020 was paused. Now the global economy is recovering slowly. There may be an opportunity behind the suspension. In the face of crises, some people feel depressed, but other ones can seize opportunities in crises. Which works of art are star lots bringing an excess rate of return? After the【Feature - Market】, we continue to explore how to seize opportunities in crises. High-return lots in a huge amount of works of art are like gold ore which has not been found but is immeasurable in price after being possessed. 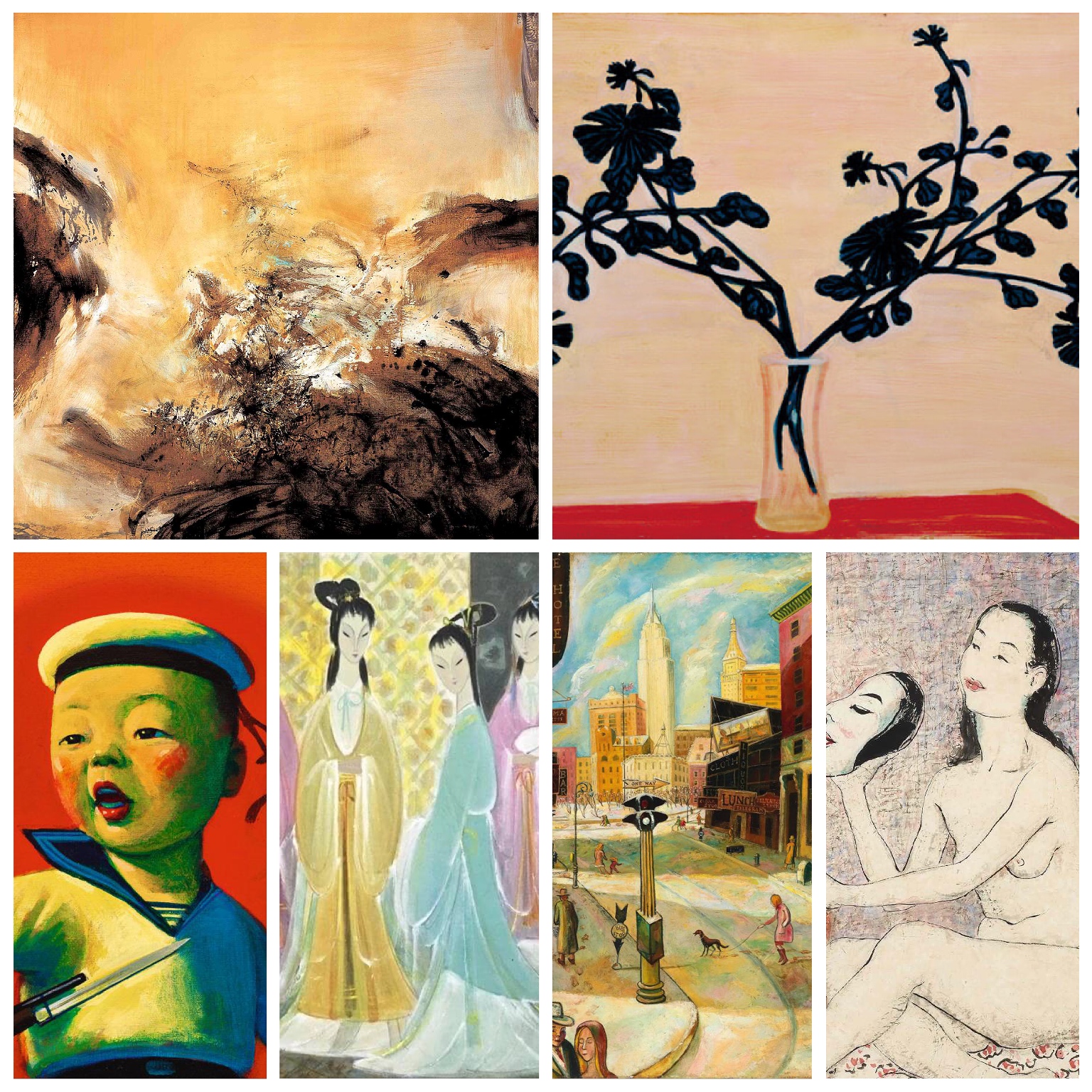 Seizing opportunities in crises is a key to achieving a high investment return.

When the economy is optimistic, there will be a bull market where the premium cost is relatively high, when the economy suffers a downturn, both the seller and the market will be very prudent, and people who can seize the opportunity may become the winner in a crisis. Looking back at the financial crisis of 2008, the global art market could not escape from it. The average over-low/high-estimate rates were very low between 2008-2009. In such a case, the market liquidity is the tensest, most collectors are very prudent and rational, but relatively less competitiveness brings collectors a golden time for buying works, and collectors often have a bigger value-added space and safer margin for buying classical works. 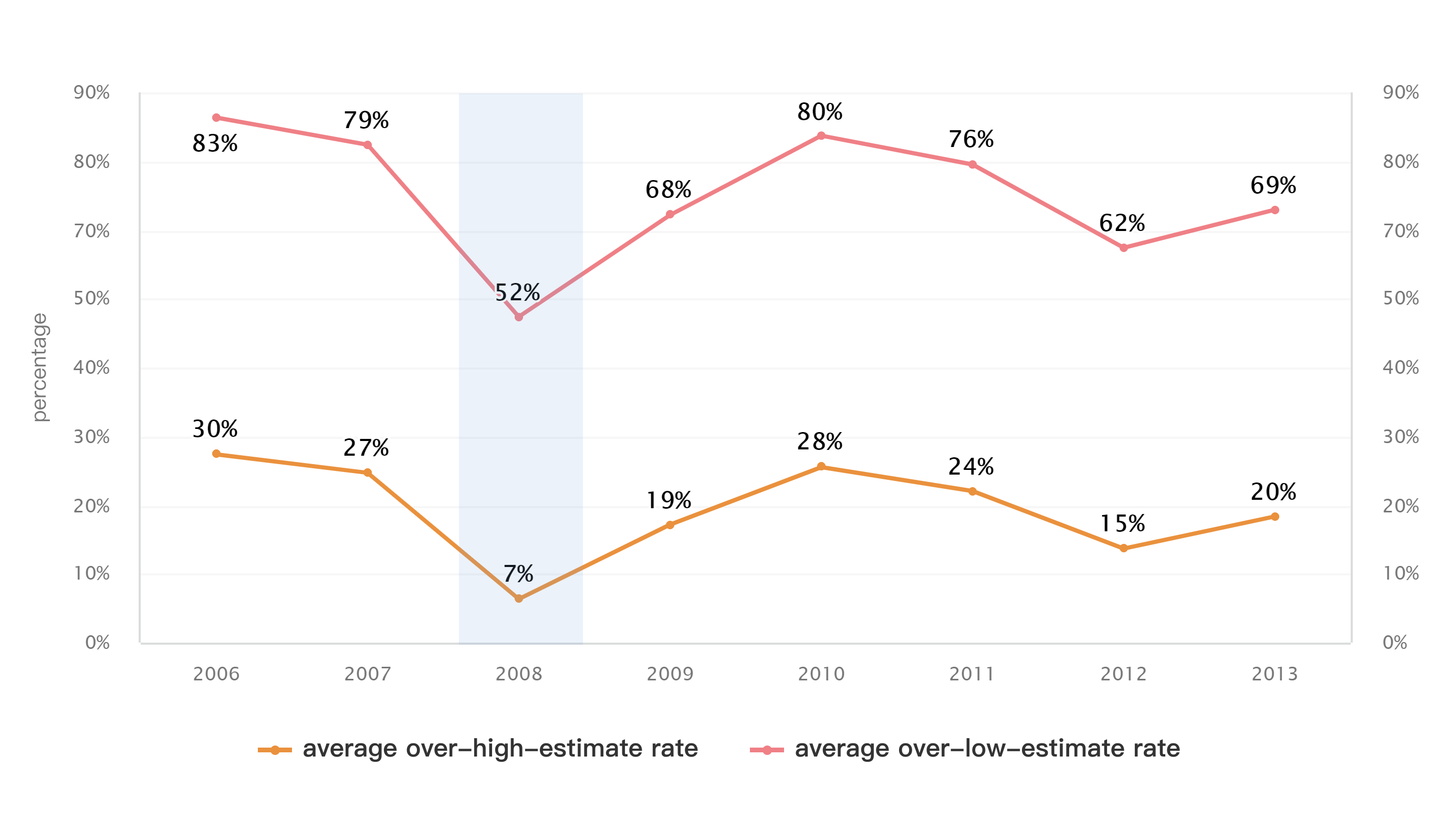 We will focus on some star lots bringing collectors an excess rate of return and explore their market performance after a crisis from the perspective of over-low/high-estimate rates and rate of return.

Focus on star lots bringing an excess rate of return 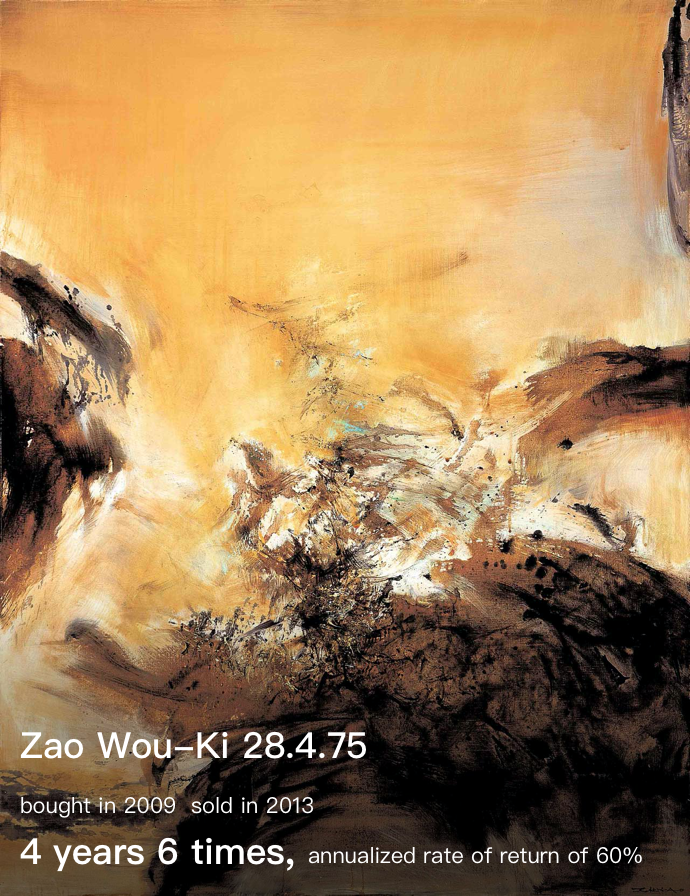 4 years 6 times,annualized rate of return of 60%

As a representative artist of contemporary artists, works of Zao Wou-Ki have always been the popular focus in auctions. And the " Zao Wou-ki Fever " in the auction field had shown some clues before the crisis. However, during the financial crisis in 2008, its market performance was affected inevitably, and his works' average over-low/high-estimate rates declined to the bottom. In such a case, people who dare to seize the opportunity may become a winner in this crisis. 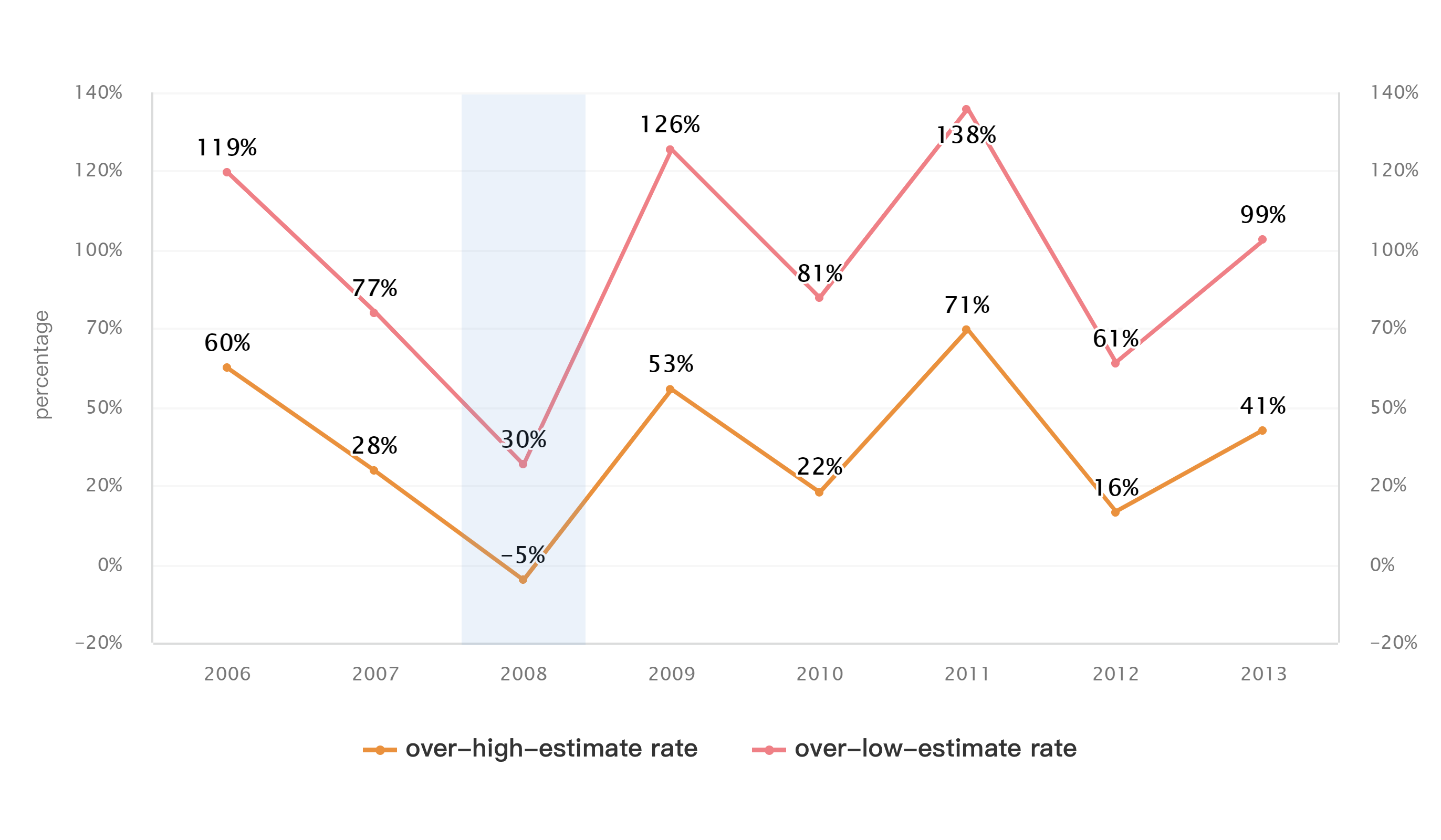 In 2013, this lot was auctioned in Ravenel again. The estimate price was USD 780,000 - 1.55 million, but bidders competed fiercely. After 15 times of bidding, the turnover price reached USD 1.79 million, realizing an over-low-estimate rate of +99.67%. In four years, the turnover of the same lot increased by five times, achieving the annualized rate of return of 60%. It is a distinctive one among the artist’s artworks auctioned repeatedly, and the collector who bought it in the crisis successfully gained a high return within a short term. 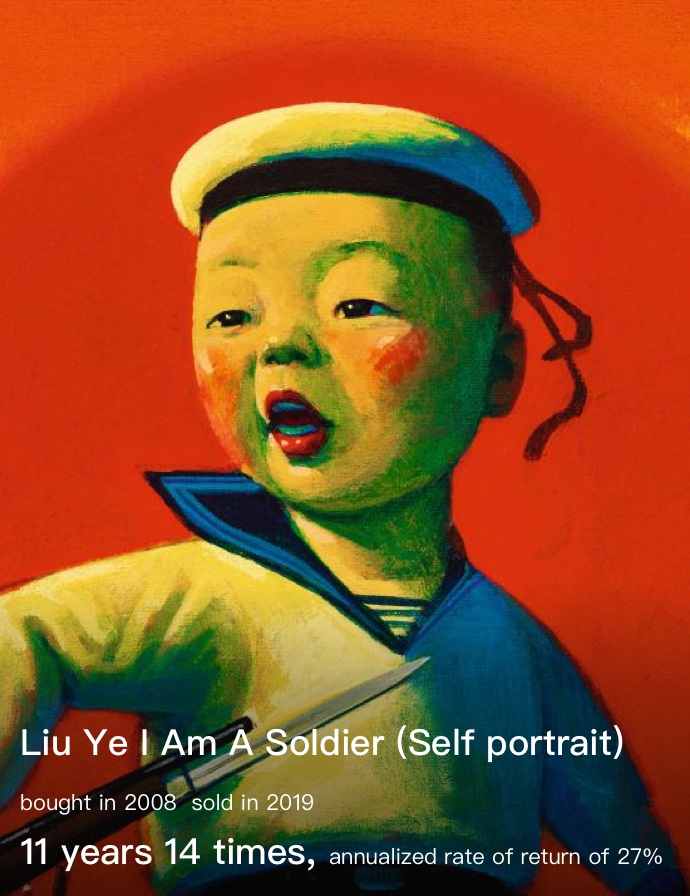 Liu Ye’s unique expression full of childish interest is distinctive among Chinese contemporary artists. His artworks have always been the popular choice in auction field. From the perspective of over-low/high-estimate rates before and after the crisis, they were at the trough between 2008 and 2009, but it was also the best time for buying them. We take I Am a Solider as an example to recall how the collector seized the investment opportunity. 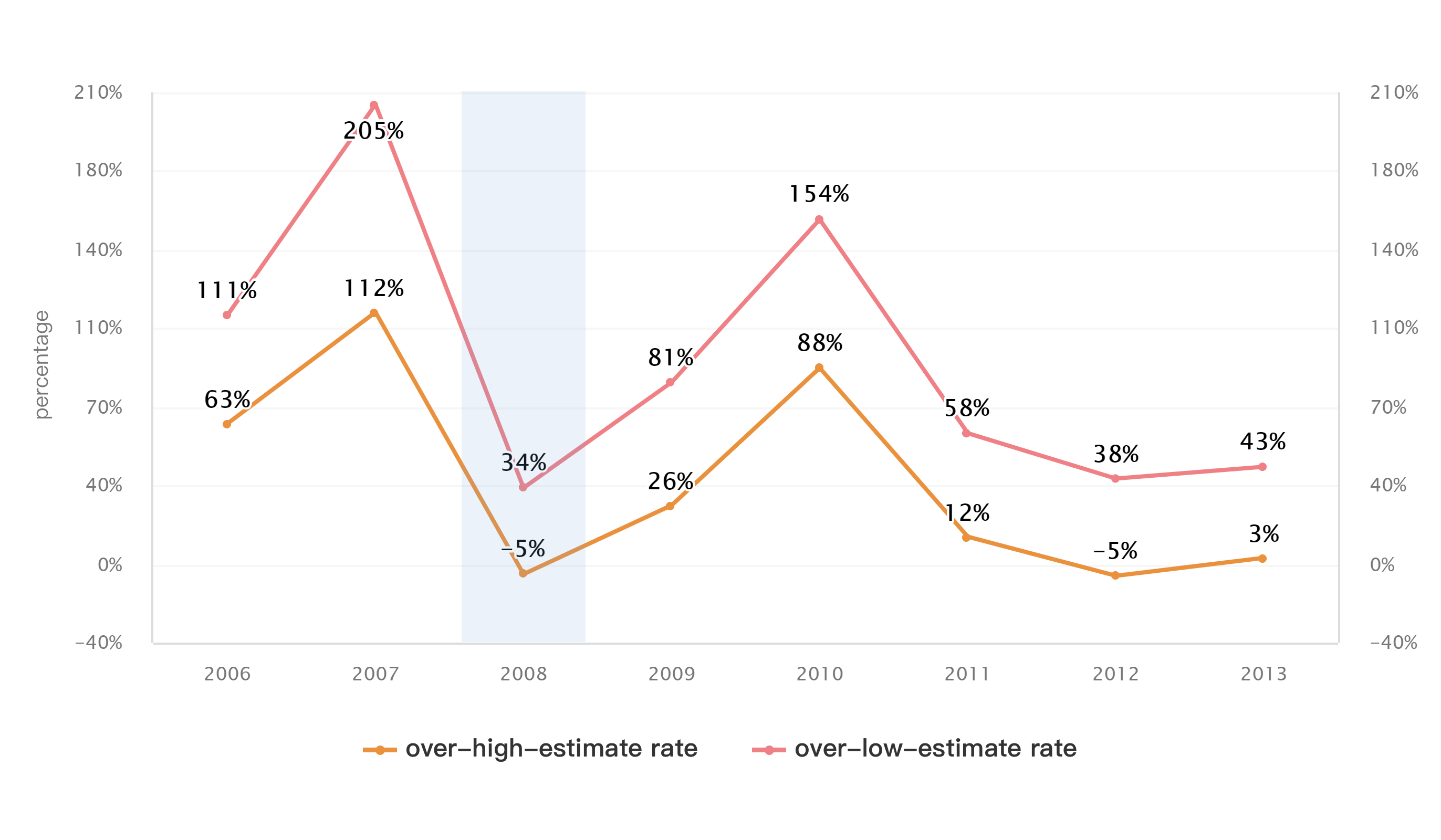 In 2019, this artwork was auctioned again. Its estimate price was USD 510,000 - 770,000, and was finally sold for USD 1.43 million, 11 years 14 times,annualized rate of return of 23%，ranking the second place among the artist’s artworks auctioned repeatedly. The over-low-estimate rate of this deal was +133.65%, far higher than that of +21.43% during the crisis 11 years ago. The surge of price suggests the importance of the right time. 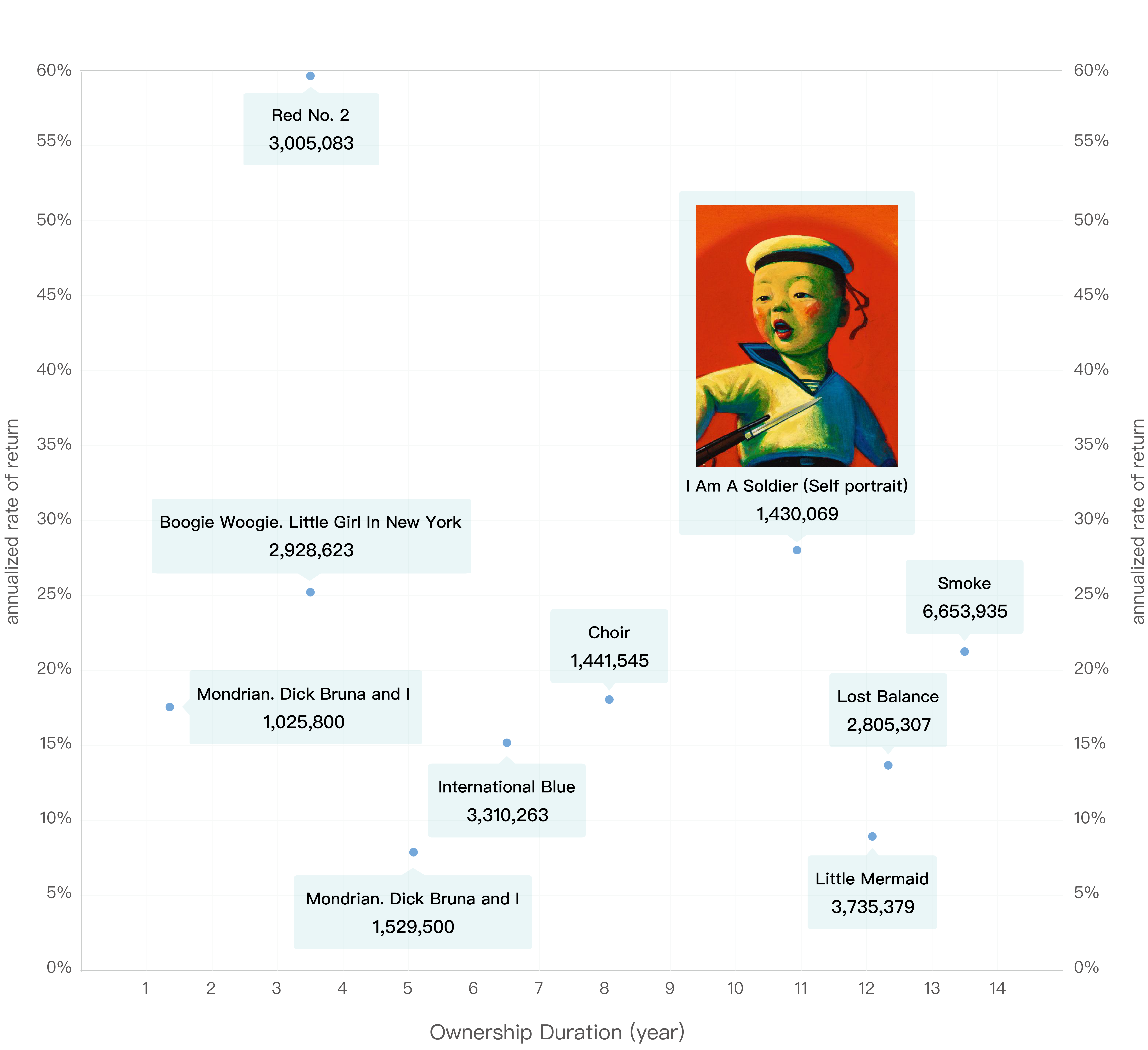 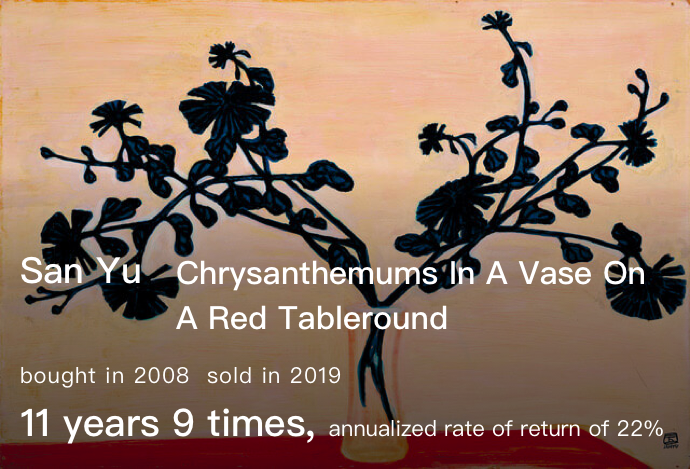 San Yu has always been one of the most popular representatives among contemporary artists. His works’ over-low/high-estimate rates were very high before 2008 but suffered a fall during the financial crisis. This trend indicates that crises always bring collectors opportunities. We can take one representative work of San Yu as an example to illustrate the importance of seizing opportunities in crises. 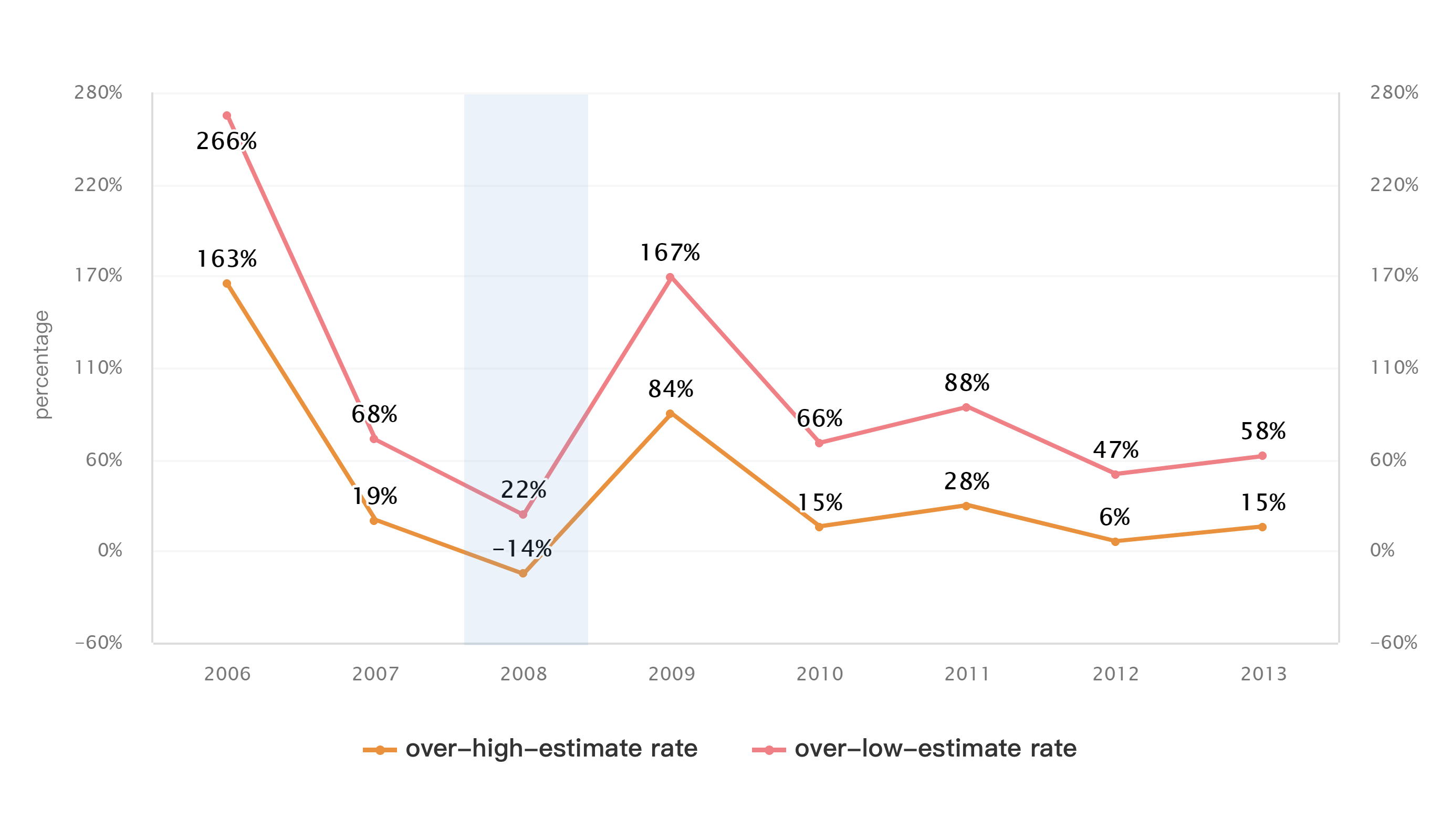 Bottled Chrysanthemum on the Red Desk is a classical work in the black period of San Yu. In 2005, this artwork was auctioned at Christie’s Hong Kong. Its estimate price was USD 200,000 - 230,000, and the turnover was USD 532,000, realizing an over-low-estimate rate of +125.47%. At that time, the turnover of every square meter ranked only second to Four Naked Women, indicating that this work was very hot over ten years ago. During the 2008 financial crisis, this work was auctioned again. Its estimate price was USD 1.03 million - 1.29 million, and finally was sold for the low-estimate price, USD 1.03 million. 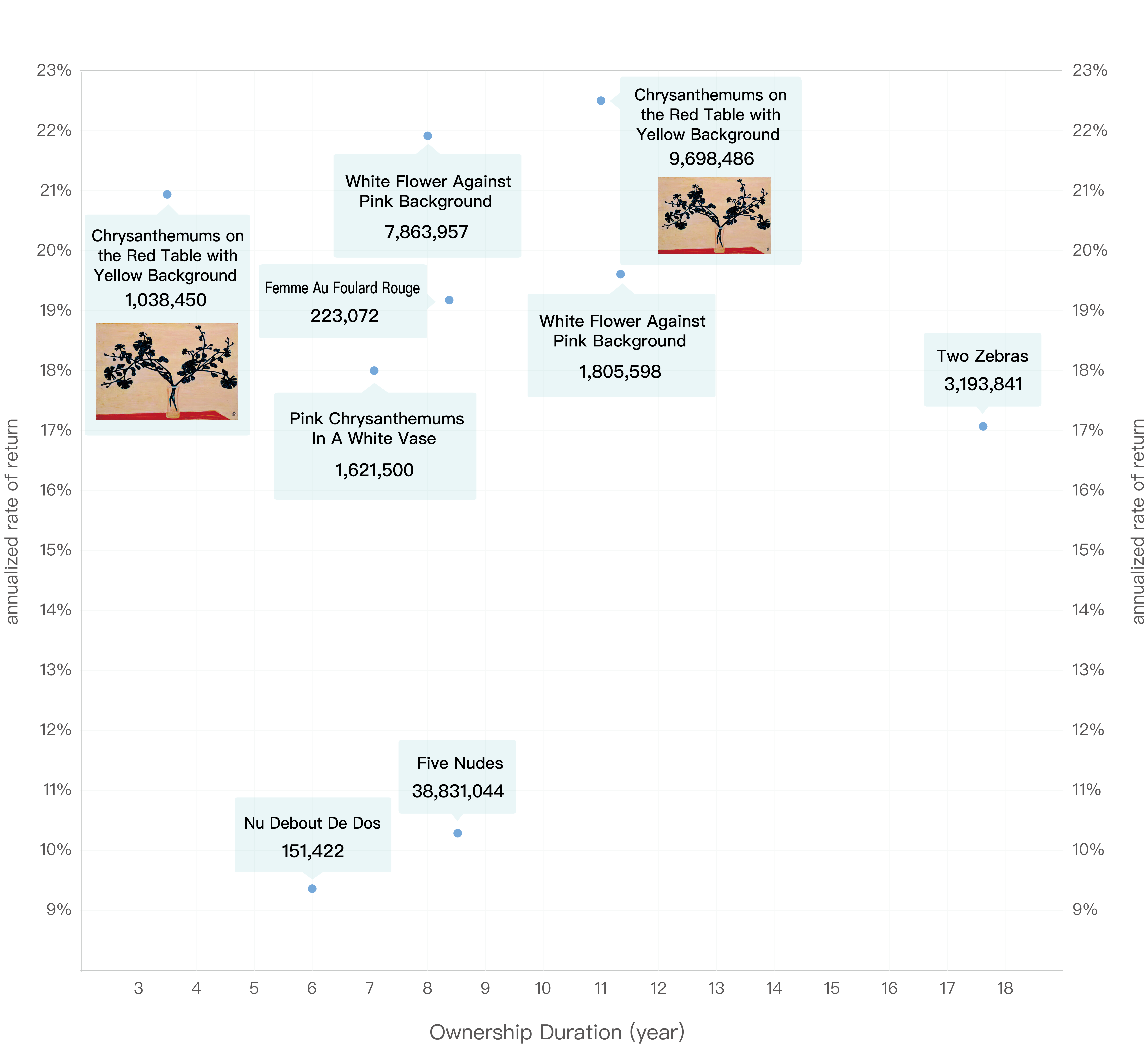 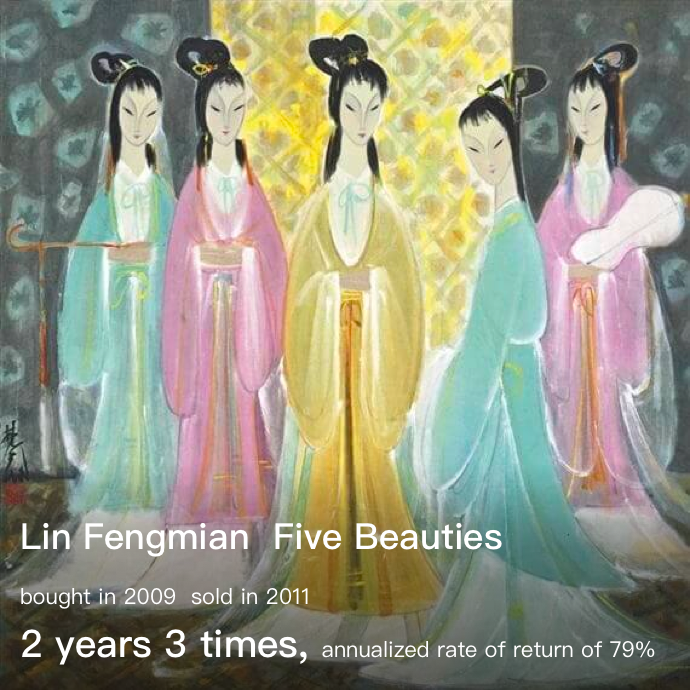 2 years 3 times,annualized rate of return of 79%

At the auction held by Hangzhou Seal In Time in 2009, Five Beauties of Lin Fengmian was auctioned. The work's estimate price was USD 520,000 - 740,000, and the turnover price was USD 850,000, realizing an over-low-estimate rate of +42.86%. Traditional Chinese painting of beautiful women is an important part of Lin Fengmian’s best period. The collector seized the opportunity in the crisis and bought this work with only USD 850,000. Five Beauties ranked among Top3 of Lin Fengmian's works sold in 2009. In 2011, this work was auctioned in Beijing Guardian. Its estimate price was USD 950,000 - 1.27 million, and the turnover price was USD 2.56 million, realizing an over-low-estimate rate of +133.33%. Over just two years, the lot had increased by three times from 850 thousand dollars, realizing an annualized rate of return of 79%. Five Beauties not only realized the transition from hundred-thousands of US dollars to millions of US dollars, ranking the personal most expensive work Top7, but also was far ahead in terms of the rate of return. 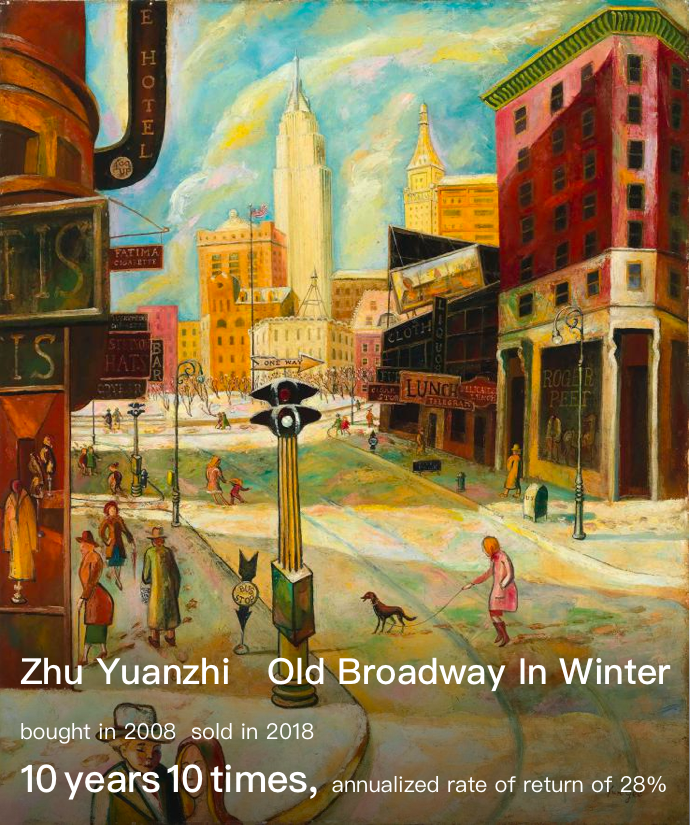 The influential degree and time of a crisis vary for different artists, but the same thing is that collectors should seize opportunities in the crisis and obtain precious lots with a low premium. Compared with artists introduced before, the 2008 financial crisis gave artist Zhu Yuanzhi more impacts. The over-low/high-estimate rates of Zhu Yuanzhi's artworks maintained low during 2008-2011 and till 2012 finally began to recover. 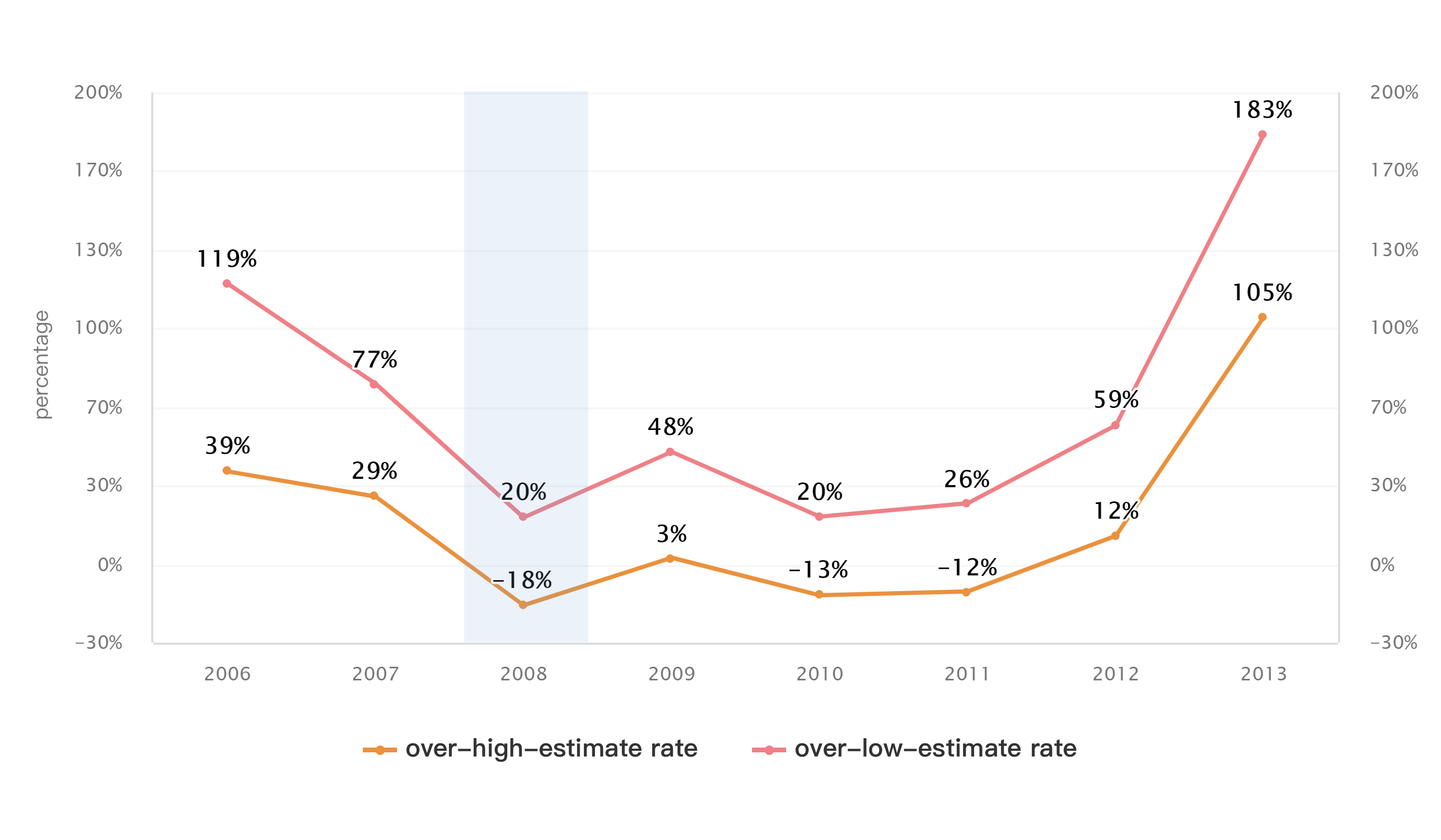 Old Broadway In Winter is a representative of the “Diamond-ism” of Zhu Yuanzhi . Its estimate price at auction in 2008 was USD 710,000 - 970,000, and the turnover price was USD 712,000. At the market trough, the collector bought this precious representative work without paying much high premium.

Ten years later, the work was auctioned at Christie’s with an estimate price of USD 3.82 million - 5.10 million, and finally was sold for USD 7.47 million, realizing an over-low-estimate rate of +55.17%, reaching an annualized rate of return of 28%. The turnover price increases 10 times. Bought with a price of USD 712,000, the collector seized a perfect market opportunity. This representative also became Zhu Yuanzhi's most expensive work Top2. 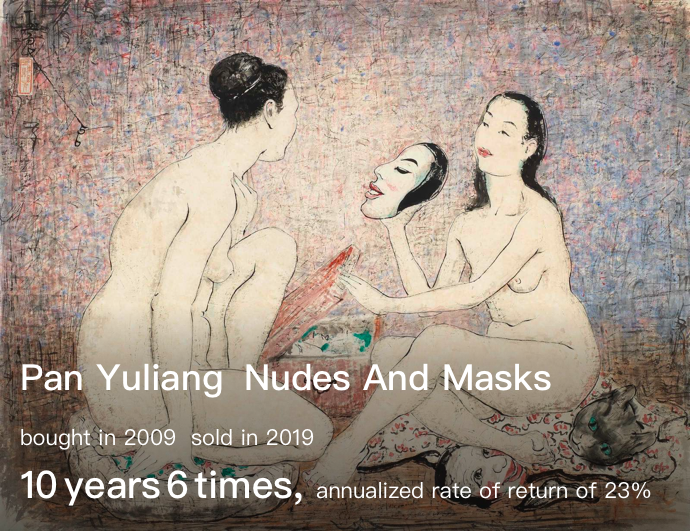 From the second half of 2008 to the end of 2009, the market liquidity was the tensest, collectors tended to be prudent, the relatively less market competition was also obvious to the artists. Pan Yuliang was one of the most influential female painters and modern art educators in the 20th century. Due to impacts of the crisis, his works’ over-low/high-estimate rates remained low. 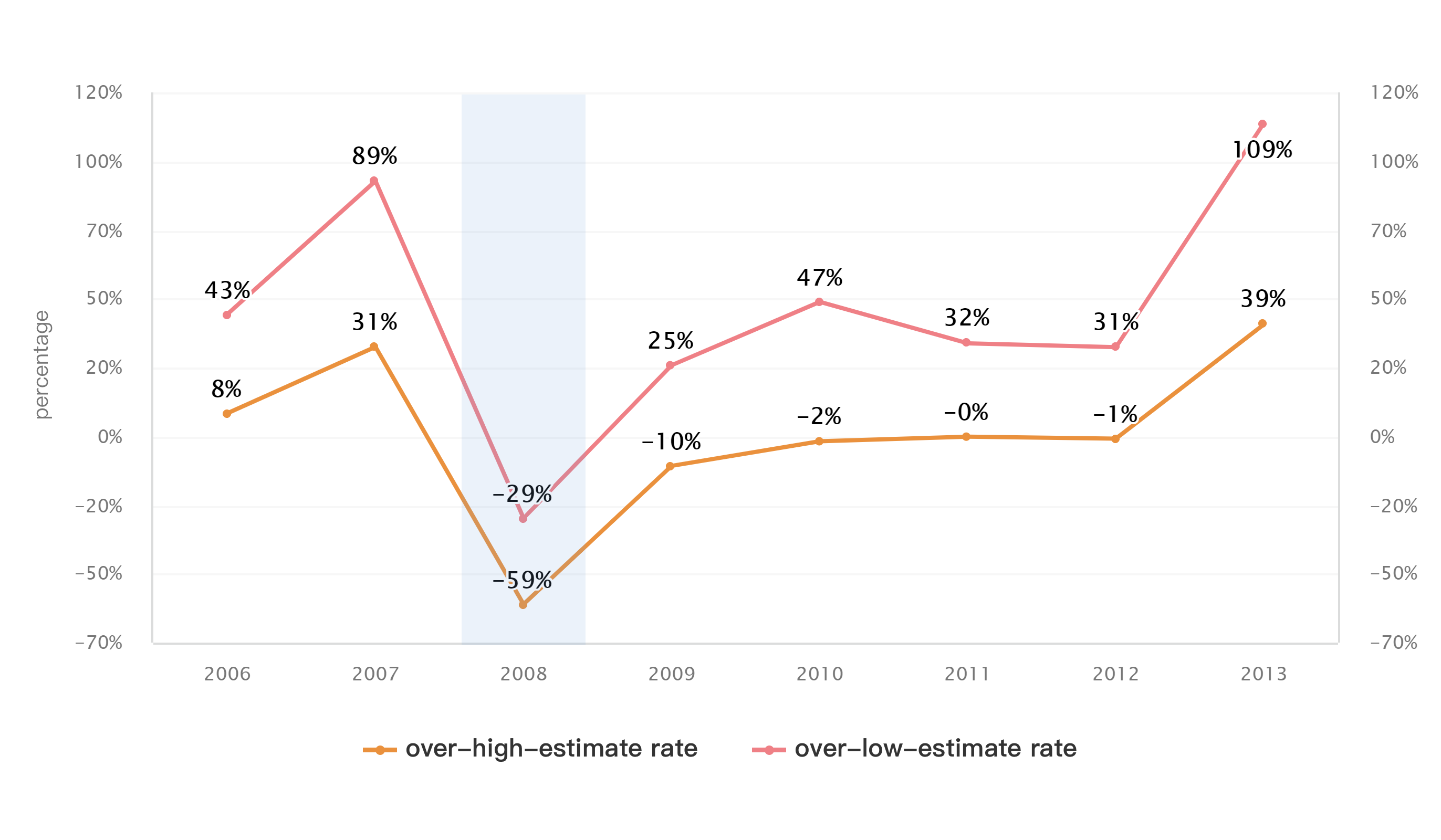 Conclusion: The previous crisis and the current COVID-19 seem like a filter for the global art market. Only powerful galleries and auction houses can win by taking the challenges. As for the buyers, some collectors might wait and see or do not consider bidding, meanwhile some ambitious buyers will seize the opportunity to change a crisis into an opportunity. Where are the opportunities then? We will present you multi-dimensional market data in the next article [Feature - Big Data] Retrospect Ten Years of Ups and Downs of the Auction Field after the Crisis and See Presence and Exit of Artists in Vicissitudes. We hope that we can provide collectors with more information.

Never stop providing high-quality content. Clients who are interested in more analysis reports of art market can preview the market reports of your concern in another way. Based on the auction data of the global art market over the years, now at this stage ArtPro is giving professional art market reports for free. According to our users' interest, we're digging deeper into the market changes of artists and analyzing the changes in the art industry. Touch "Get Report" at the bottom left to get the report instantly,or you can continue to follow ArtPro updates and stay tuned for more highlights.