“To Youth”, let’s shake up together! Asian 20th Century And Contemporary Art Auction come on the scene! 「What if we let them fall behind and they're never found?
And when the lights start flashing like a photobooth
And the stars exploding, we'll be fireproof
My youth, my youth is yours」
—Troye Sivan “Youth”

What does art means to you? Maybe like what Troye is singing in the song “Youth”, that art is something allow us to jump outside of the reality, starts a voyage towards the unknown, curiosity, and an adventure that expanse your life experience. Every encounter with art will leave an indelible mark in your life. Art, in some way, is our youth.

Asian 20th Century And Contemporary Art Department of China Guardian (HongKong) is offering a special auction this summer, “To Youth”. In order to fit in with aesthetic perspective at present time in this modern society, 80 fantastic pieces of a great variety has been selected, include drawings, paintings, Photography, Printmaking and limited edition works. There are some classic works of Yayoi Kusama, Tsuguharu Foujita, Yuichi Inoue, Wu Guanzhong, Walasse Ting, Pang Jiun, Andy Warhol, Daido Moriyama and Nobuyoshi Araki. Also there will be many funky and stylish works of those icon stars like Mr. Doodle, Kasing Lung, Daniel Arsham, Hajime Sorayama, Yoshitomo Nara, Banksy and Takashi Murakami. Arts of those most popular cartoon figures that accompanied us from our childhood, like Doraemon, Dragon Ball, Pokemon, and SpongeBob SquarePants. Beside all of these, the auction is going show the works of three new art stars: No2Good, Chang Teng-Yuan and Tang Tang.

For the first time we will have both online and offline activities of previews and entity sales in order to present this auction. Let us embraces the art to create memories for our own youth. Let’s go! 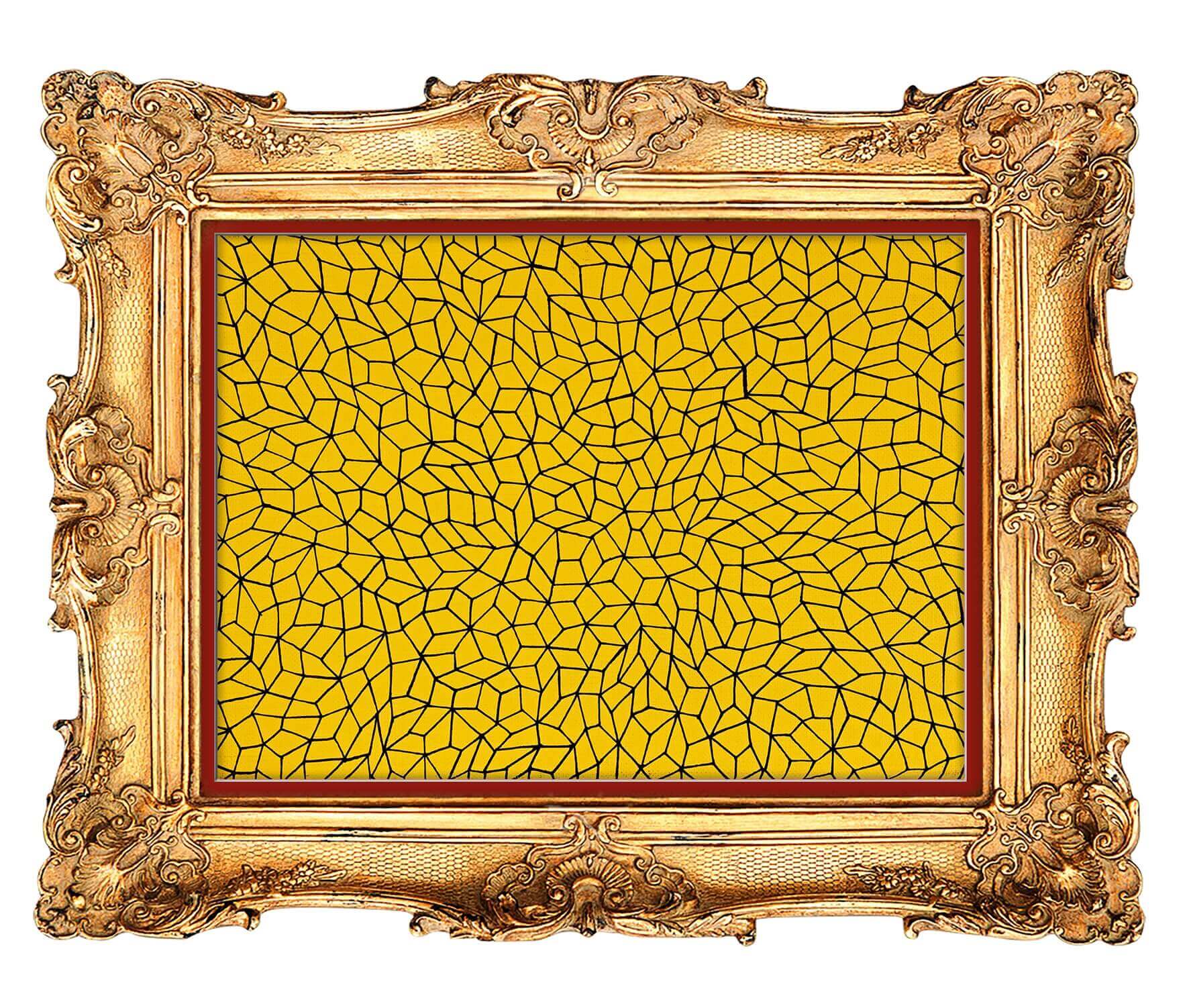 “Infinity Net” has always been the most influential and internationally well-known series work of Yayoi Kusama. The work has been created in 1993 when Kusama became celebrity in the international art world. It was once the collection of Fuji TV Gallery in Tokyo and comes with certificate issued by Kusama studio. The work was painted with the artist’s symbolic colors: yellow and black. In these patterns that made by accurate black lines and flat yellow paint, we can see her enthusiastic passion towards art. By using those loosely painted semicircles, she created a complicated and orderly constructed lace-like “net”. When the audience stand in front of this work, they will get a magical visual experience, like the painting is expending and stretching into the infinity. A world from another dimension is coming through this painting that goes onto every living things. 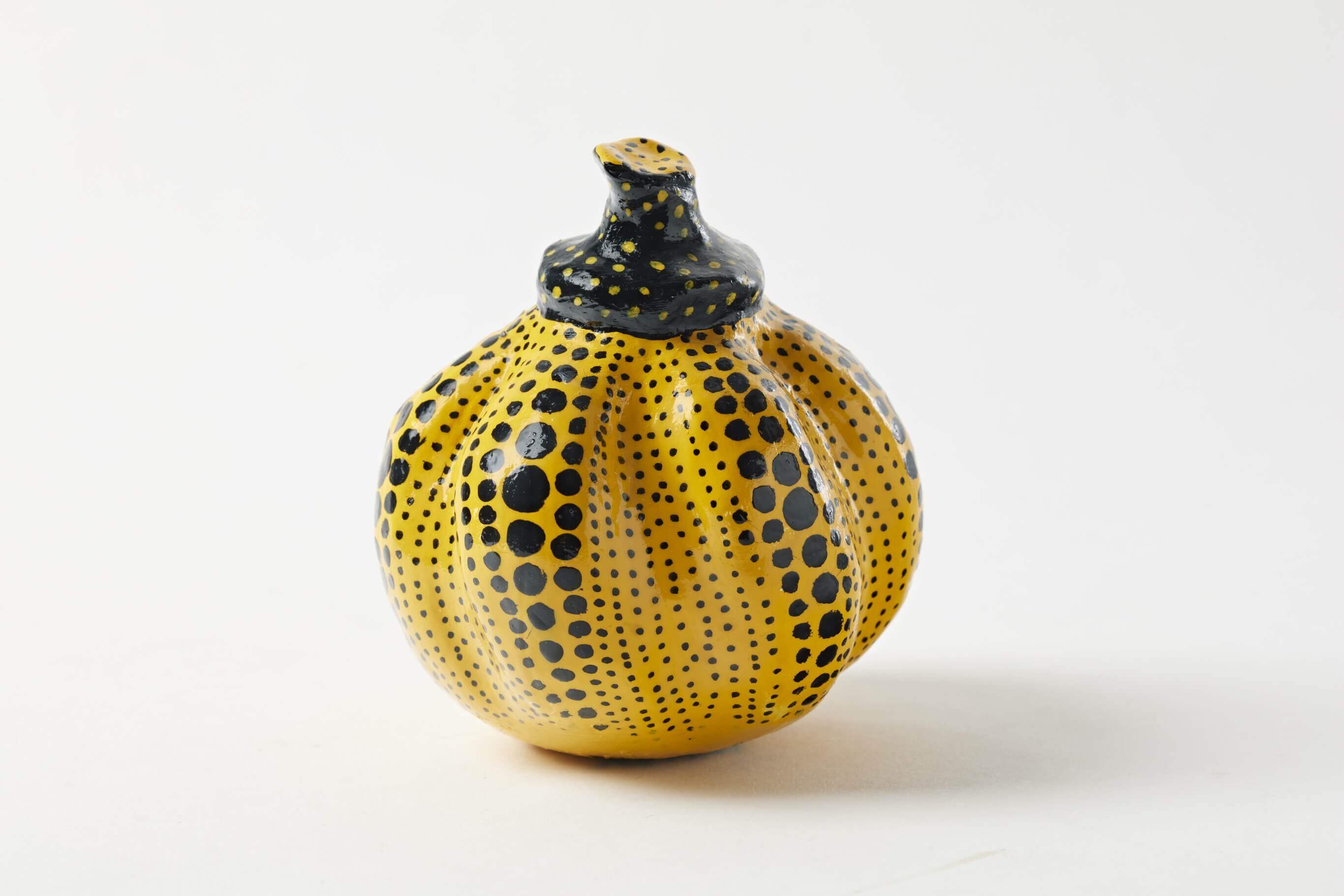 The sculpture “Untitled” is from Kusama’s work “mirror pumpkin room” at the Venice Biennale in 1993. Other pumpkin sculptures with similar scale were executed in 1985, they all have been the witness of the turning point in Kusama’s art career. As the most popular and be loved icon of all Kusama’s art pieces, The pumpkin has become not only the most classic work, but also one of the most loved and recognized image in contemporary art today. According to Kusama that the pumpkins are warm and humorous motifs, their existence is one of the few cherishable memories from her difficult childhood, pumpkins are also her best friend who support her through the hardest time in creation. Their puffy and round shape is like a small sun that lights up a hope in Kusama’s life. Compare with other square shaped pumpkin sculptures Kusama created during early 80s, this “Untitled” work has a full shape of a water drop. Its body is combined with 6 valves, it’s juxtaposition and dynamic patterns induce a rhythmic and enthralling optical sensation, which shows her passion to capture the beauty and perfection. This spiral shaped pumpkin has a competitive power of growth that expense into the outer world. 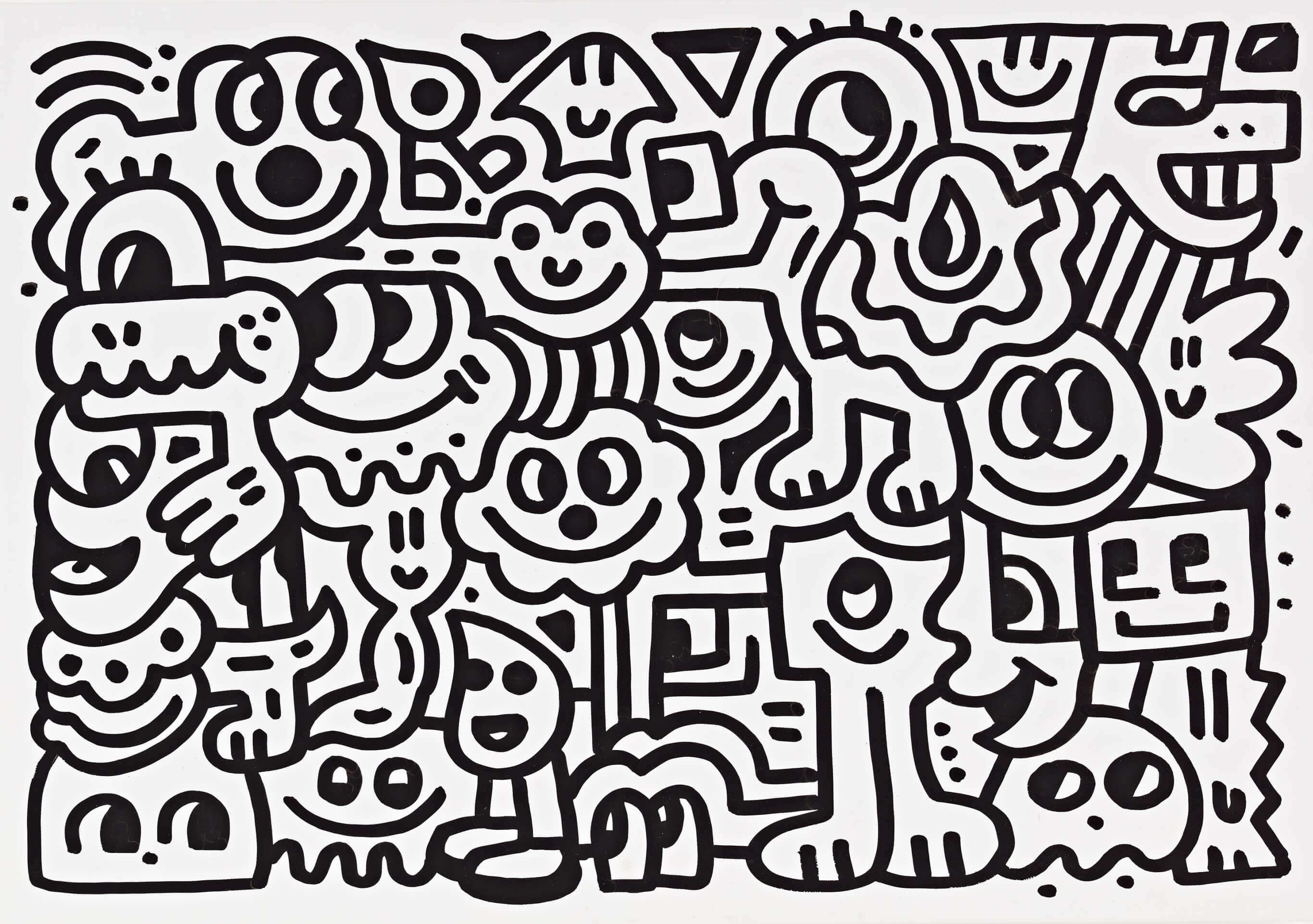 British young art star born in 1994, who gained fames in global wide and has a large number of fans. He had a big solo exhibition "Doodle World” in Seoul, and made cooperated works with Samsung, PUMA and Fendi that published in both Europe and Asia. All of his works are loved by the art fans. Mr. Doodle’s works are created with mark pens in single color, the small figures in his drawings are the most unique. Like in “Big Smile” there are 25 odd little characters with most cheerful smile on their face and they are waving at the audience. Through the story telling images he use doodles to bring a sense of humor in our lives, that make people feel the infinite vitality of art. 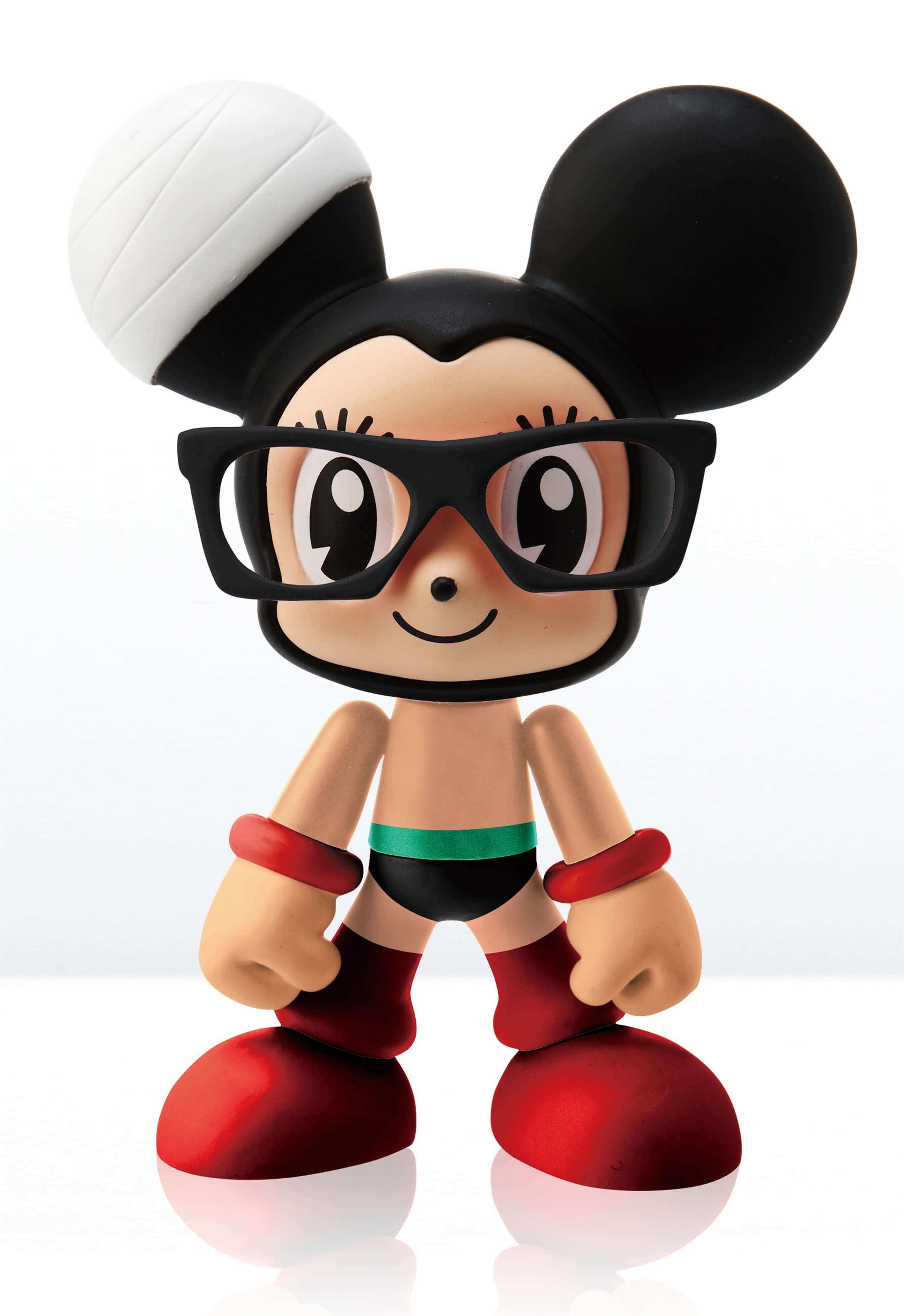 No2Good is a famous Taiwan based cartoon artist, whose most representative work is the cosplay Mousy. He had exhibitions in many countries, and recent year he has come into public attention. His works were collected by both public organizations and private collectors. This auction is going to show a 94cm Mousy sculpture which came from his series of “Hero” started in 2010, and it has been exposed at more than ten important exhibitions. This work is inspired by the famous Japanese animation “Astroboy” combined with artist’s individual style. The firm and persistent face of this little mousy represents the superpower that every normal person hides under the ordinary outlook, which made them so unique. The braveness and of youth can take us through all the difficult moments in our lives. 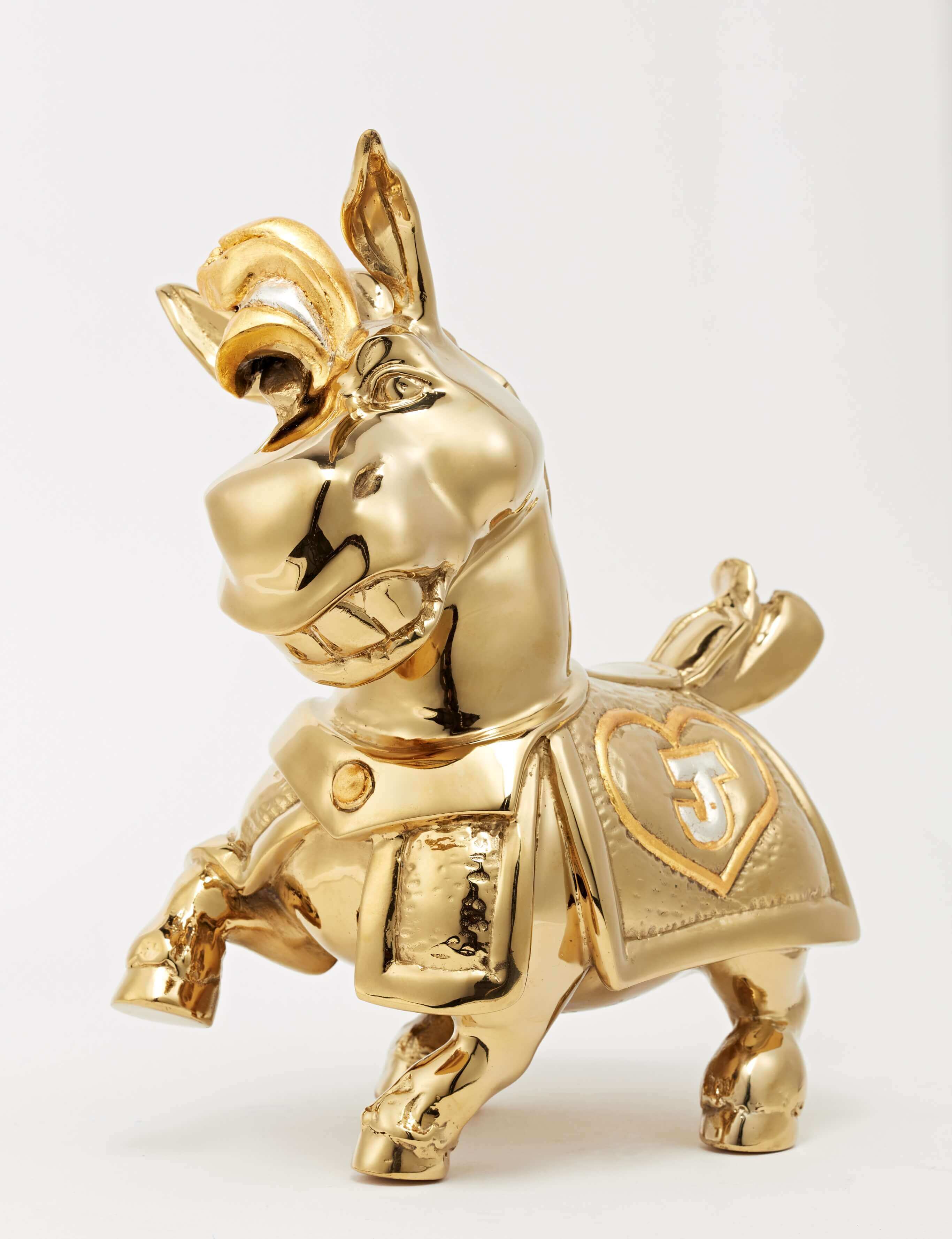 Yang Maolin is known for his Buddhist iconology manga icons, he participated the 2009 Venice Biennale, and gained an international reputation. His works has diverse form and also very energetic. His recent works are a group of sculpture that were based on the characters from “Alice in Wonderland”. “Jack's War Horse” is a typical work, the figure came from the horse of “Jack the Black Knight”. This cheerful horse has the knighthood spirit with a more dramatic and humorous character. This sculpture shows the childish disposition still remains in artist’s mind, his art will brings fun and joy to everyone. 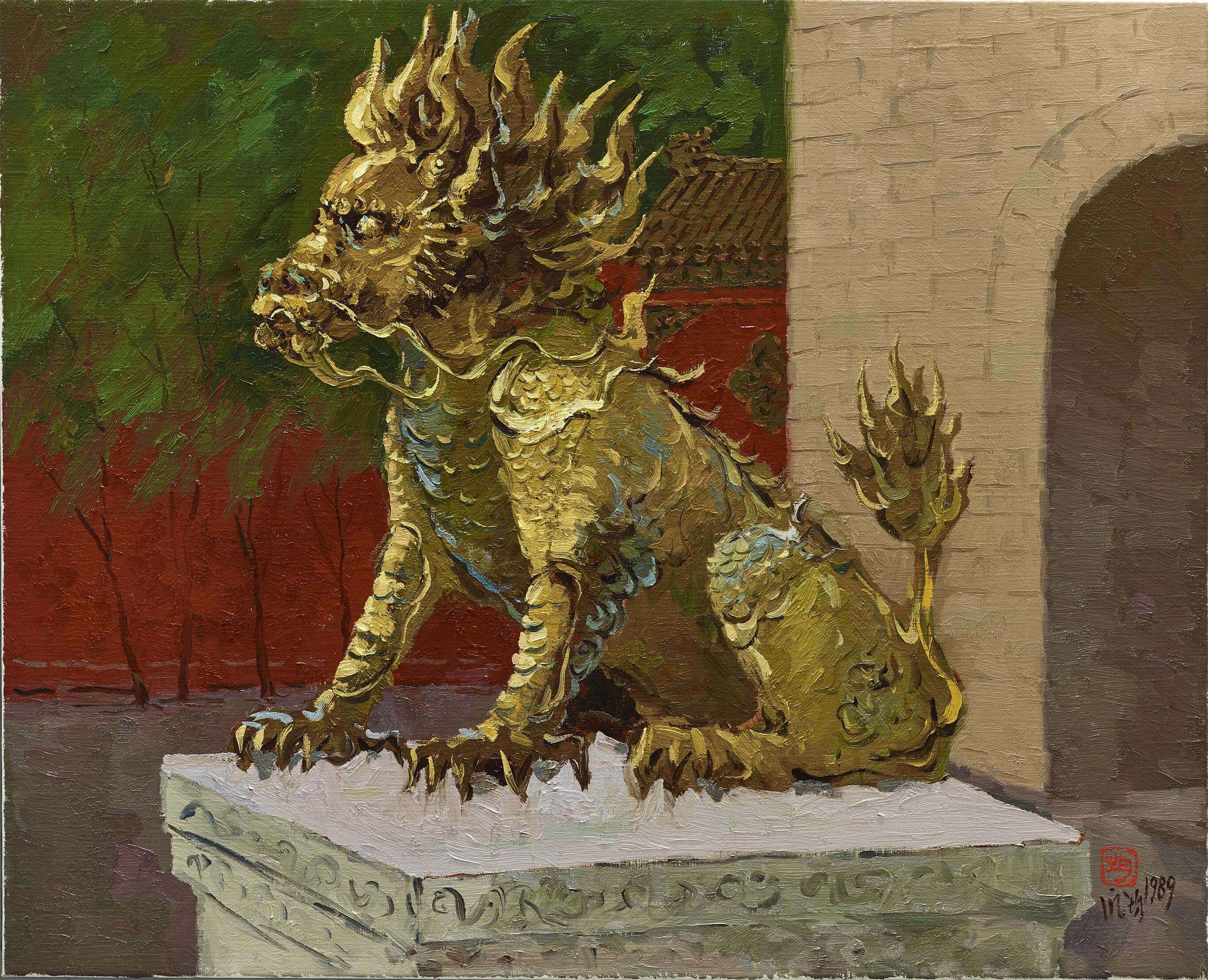 The work “Kylin”was created in 1989 by artist Pang Jiun, this one of the most unique piece in Pang Jiun’s art career. The Kylin in this painting is based on the monster sculpture in front of Tianyimen gate of Forbidden City in Beijng. The Kylin is sitting on top of a stone pillar, with a mighty gesture, covered in scales and shells. It has bright piercing eyes and hairs look like flame. Its tail is cocking up, and the feet is firmly grabbing the ground which made it looks magnificent. Pang Jiun is very sensitive with colors, he uses different levels of yellow and complicated brush strokes to paint the muscle of Kylin with great tension and beautiful gloss. A few mottled trace on its body shows the sense of history, also make the red wall and green willow leaves in the back ground stands out. Through this painting the audience have chance to witness the elegance of a small part of the Forbidden City. 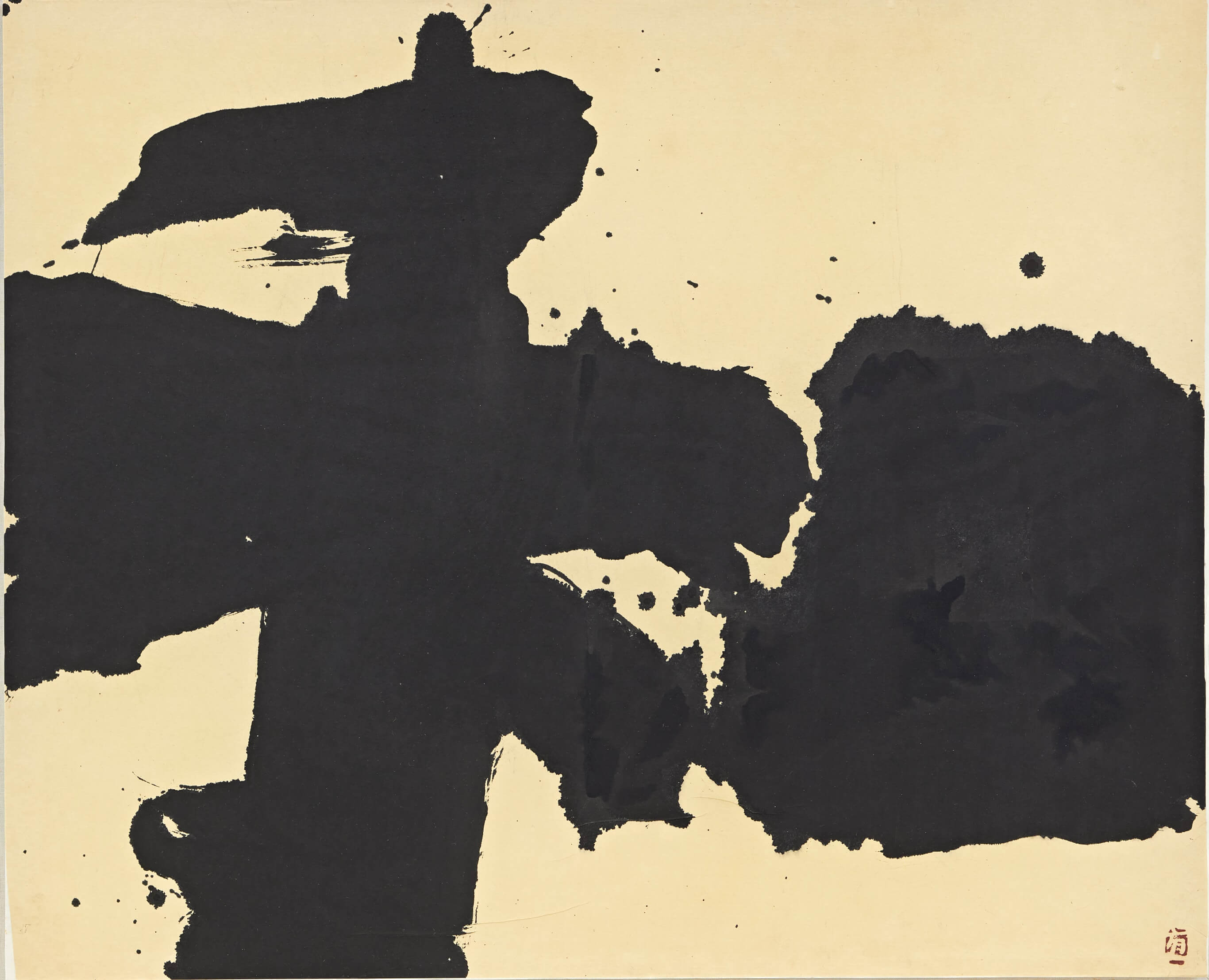 The work “Wa (Peace)” was created in 1972 by Yoichi Inoue who was considered an avant-garde calligrapher for his method of dealing with the calligraphy works not as words but as a whole image, his brush strokes has a unique perspective towards the composition of space, which is almost geometry like. This made the expressive power in his works and a creative image relationship. The structure on the left side of this painting has a strong and solemn beautifulness, and on the right side the artist created this circle that embraces the meaning of word “Wa (Peace)”. This work is also a solute Japanese Emperor of Showa period from the artist. 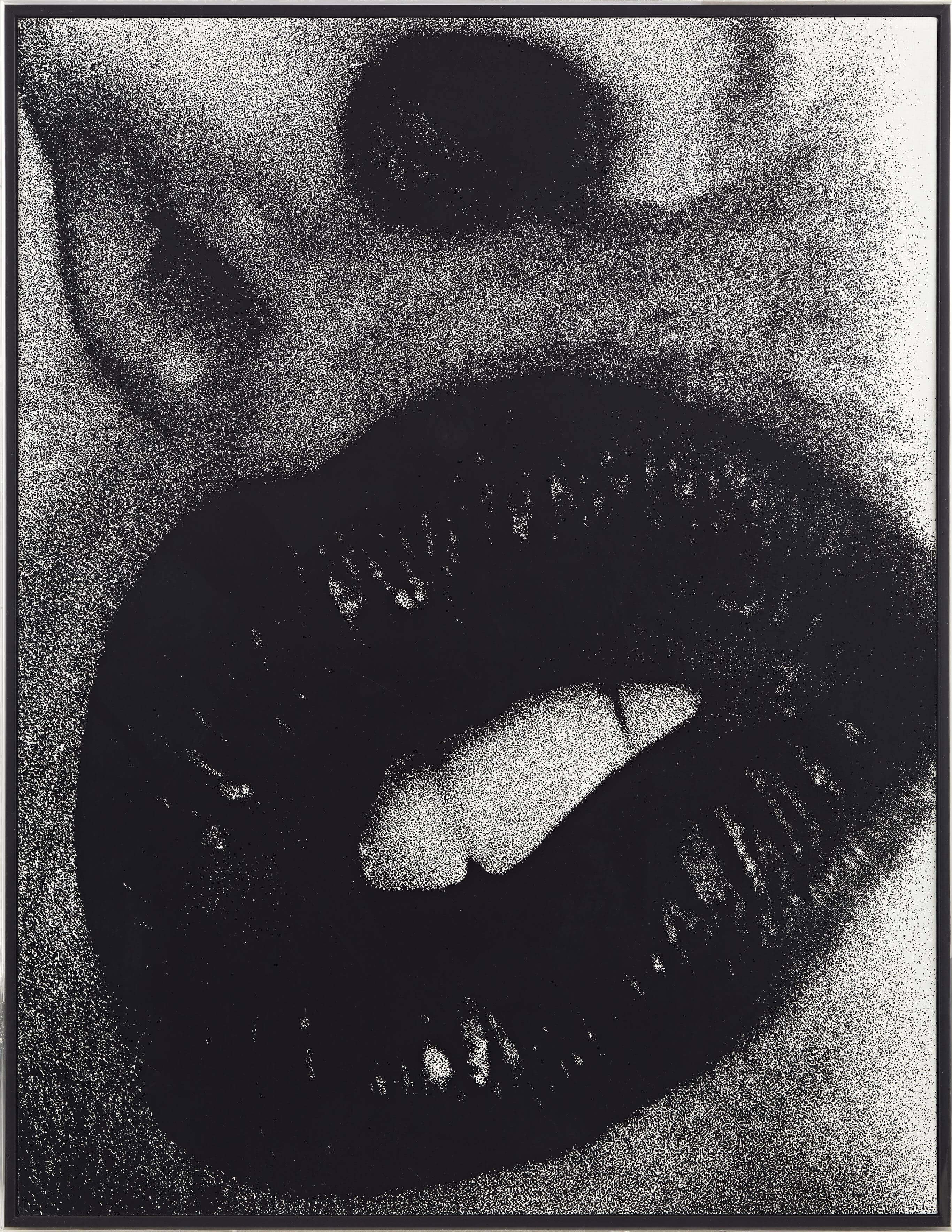 Daido Moriyama is one of the most revered living Japanese photographer at present time. The work “Rip” is a silkscreen print of a new interpretation from his masterpiece “Love and others”. A slightly opened erotic mouth take up the whole image, this close up picture composition turns the outlook of the image into an imaginary space of abstraction and ambiguity. Instead of showing the whole face of this person, Moriyama chosen this distinguish symbol to represents the identity of a group people. Instinct and primitive impulse of looking is the key idea of his creation, he also created the idea of “snapshot” in photography history. The shaking image of “Rip”brings strong emotion, tension and desire. What the artist trying to document are not these juicy lips but the sexual tension and beautifulness at the moment. 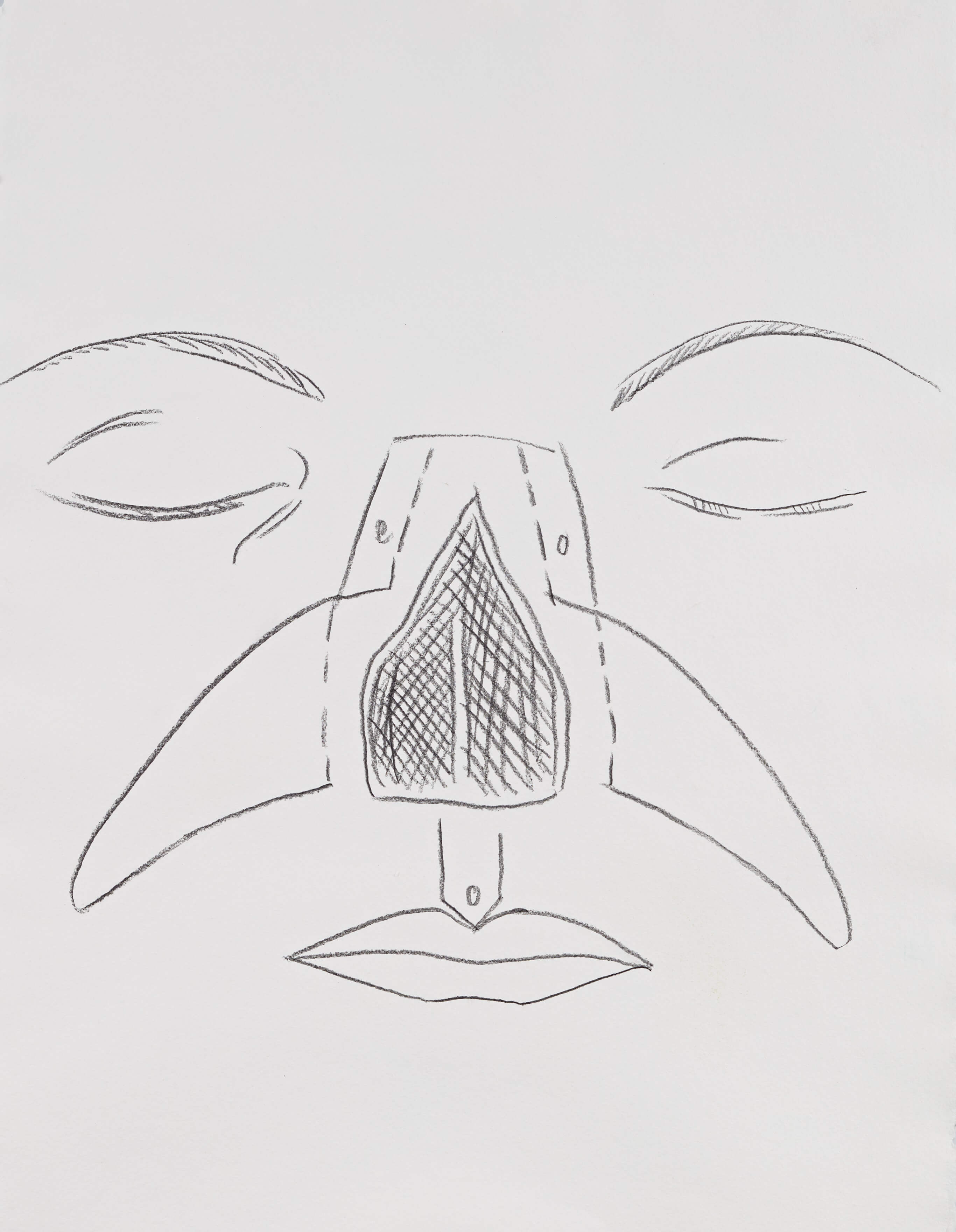 “Cosmetic Surgery” was created in 1986 by Andy Warhol, the leading figure of Pop Art. In this work he use graphite to draw a man’s face with closed eyes, thin lip and a bandage on his nose. The man has no facial expression, you can’t tell what he was thinking. His nasal area has been emphasized with darker color. This drawing reflects the artist’s personal experience, he was not satisfied with his outlook since he was child, and was hoping a plastic surgery especially in the nasal area can help him build some confidence. This work is self-portrait in some way, a sense of freedom and self-deprecating all buried in those very few and simple lines. This works is one of Andy Warhol’s heritage with a certificate by his foundation that makes it very worth collecting. 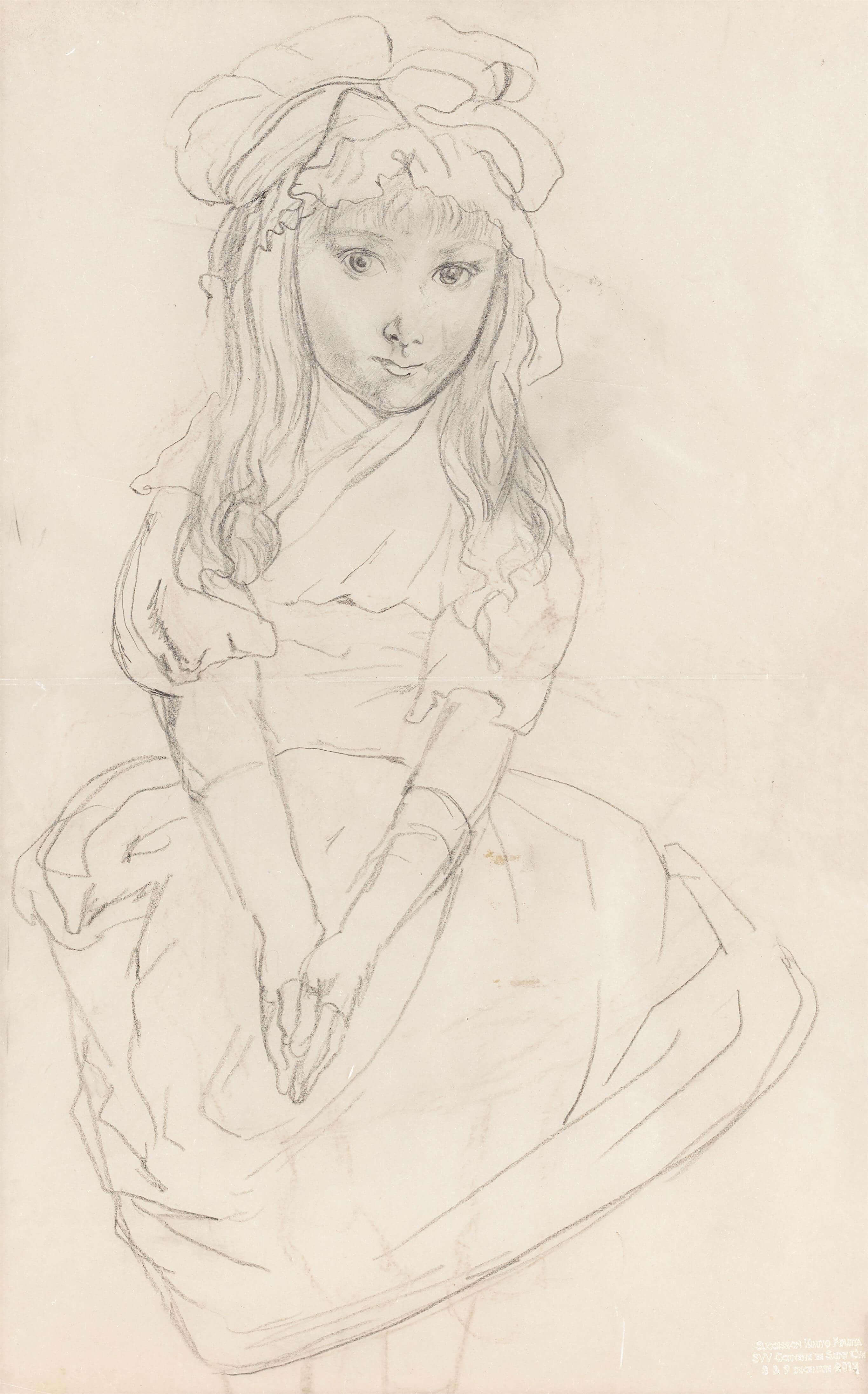 Tsuguharu Foujita married with Kimiyo Horiuchi in 1936, as Foujita’s wife and assistant she knows every work that he created. After Foujita’s death Horiuchi has been working on promoting his works in both Asia and Europe. The work “Charlotte The Smart Girl” is one of her personal collection. In this drawing the girl Charlotte is holding her hands crossed on top of her dress, this devoting hand gesture reflects the religious theme that Fujita was practicing on the works during his late years. The girls is looking at audience with insights and sophisticated wisdom. The artist named this drawing “Charlotte The Smart Girl” personally, which brings it value. 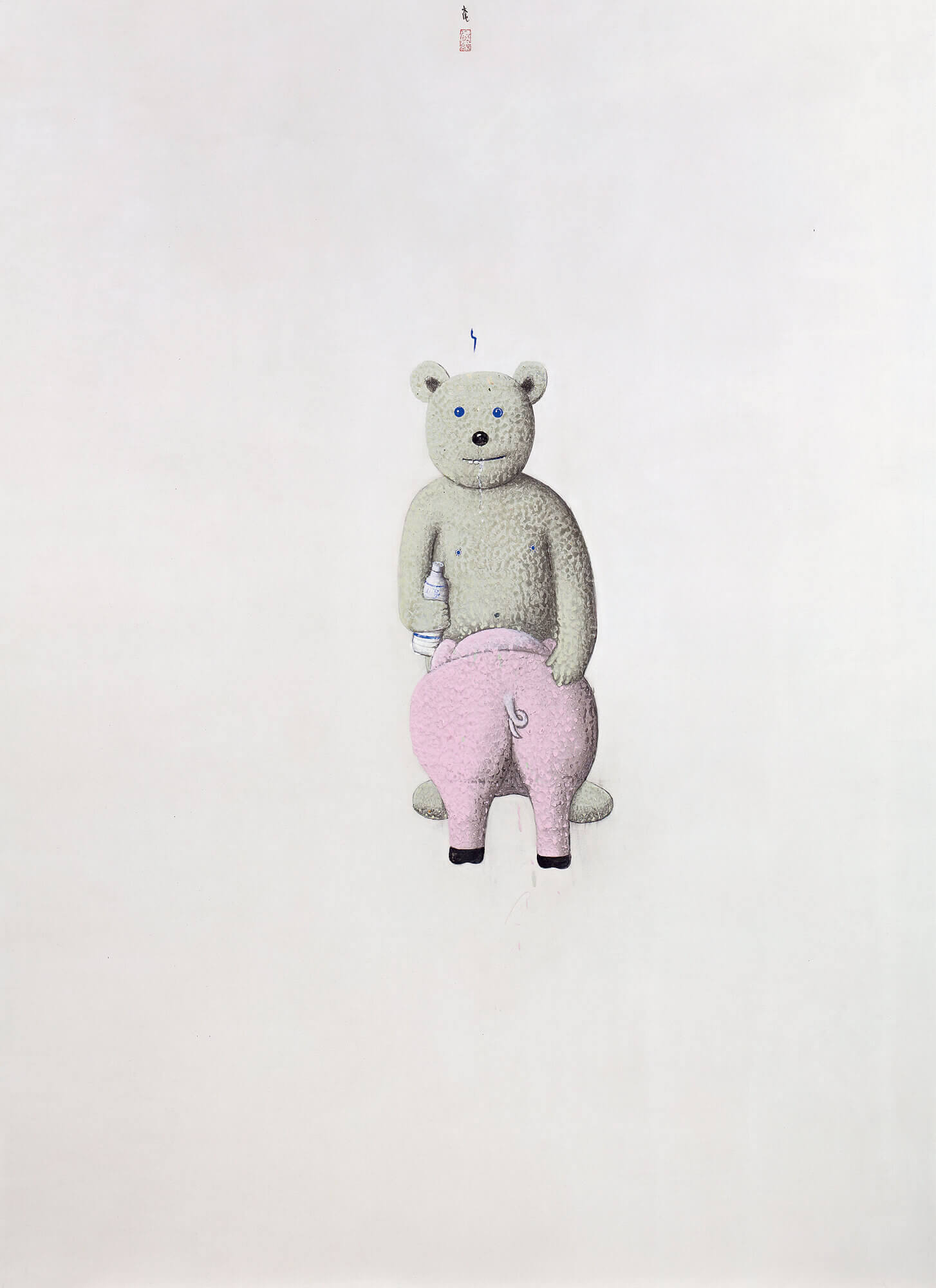 Ji Dachun graduated from Central Academy of Fine Arts in 1993, in 1998 his work was collected by Uli Sigg, an ambassador of Switzerland in Beijing at that time who was a famous art collector. Ji Dachun’s art is recognized by his using of the blank space which is an common oriental aesthetic element. This work “Love is Melancholy” was created in 2004, a half-naked little bear in this painting is enjoying himself with a pink little piggy. The artist put them in center of the canvas but only took up a small part of space which creates a dramatic result. A restraint way of using colors and the philosophy of leaving blanks brings out his strong personal style. This work is going challenge the audience with issue of both racial and gender crossed love in this modern society. 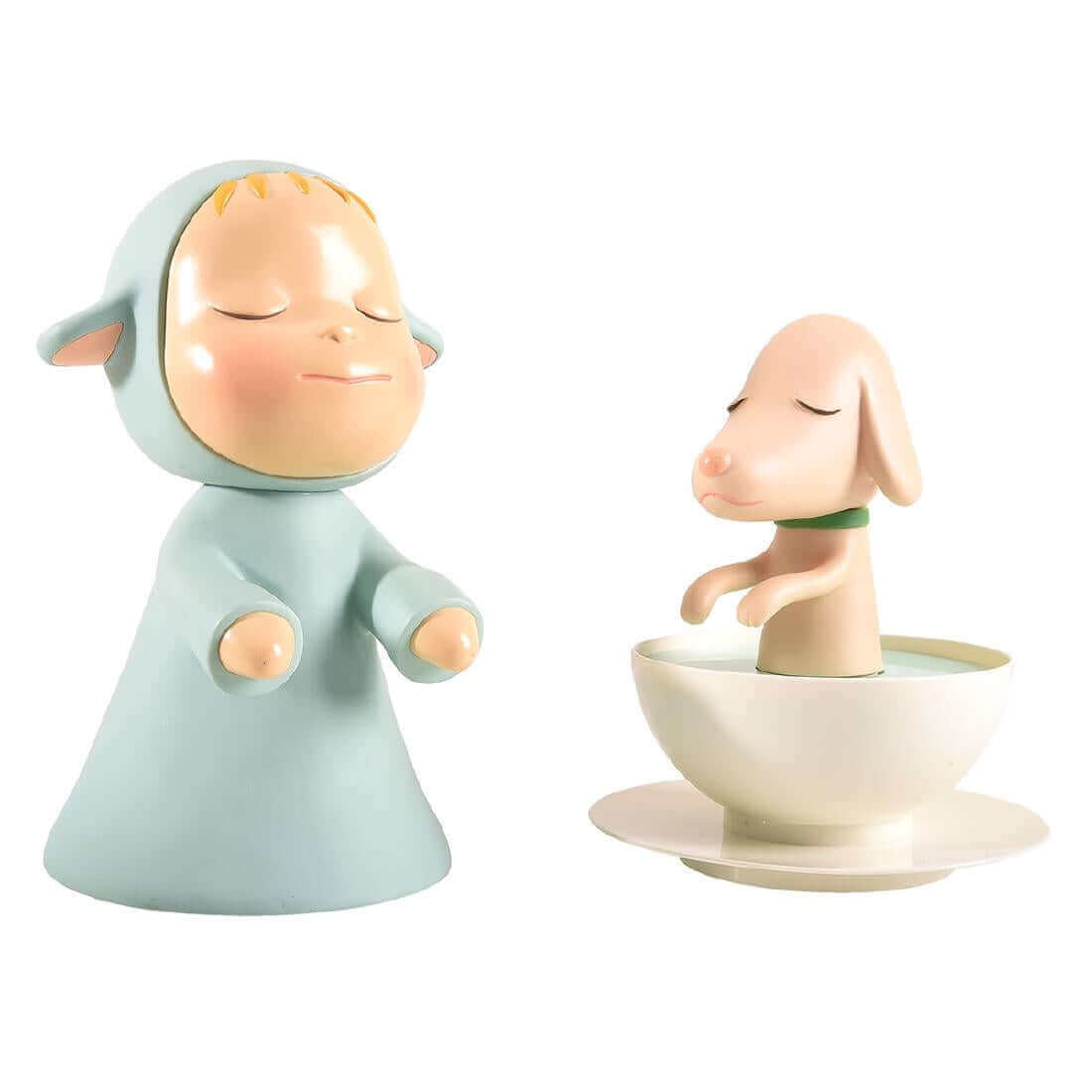 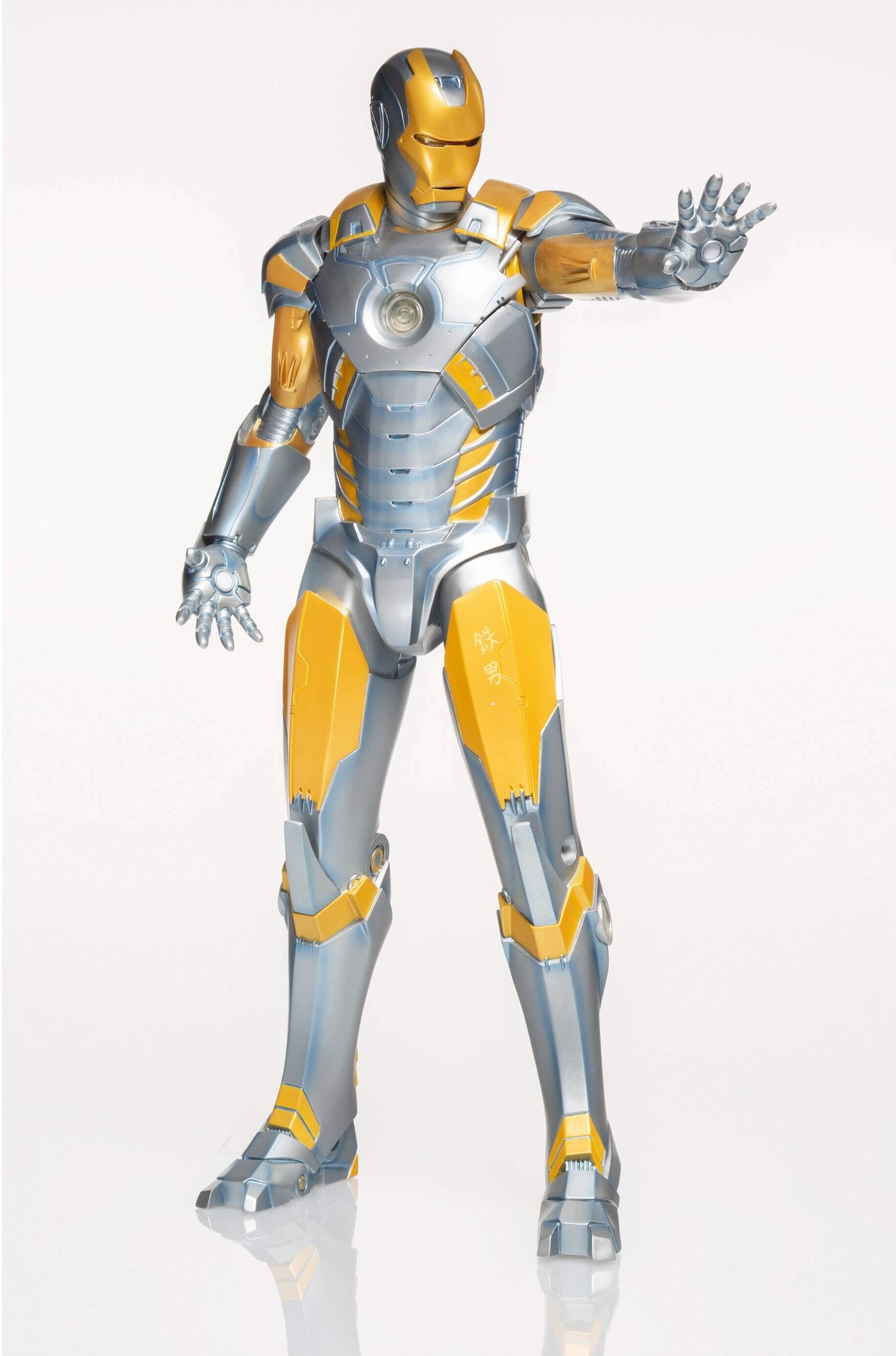 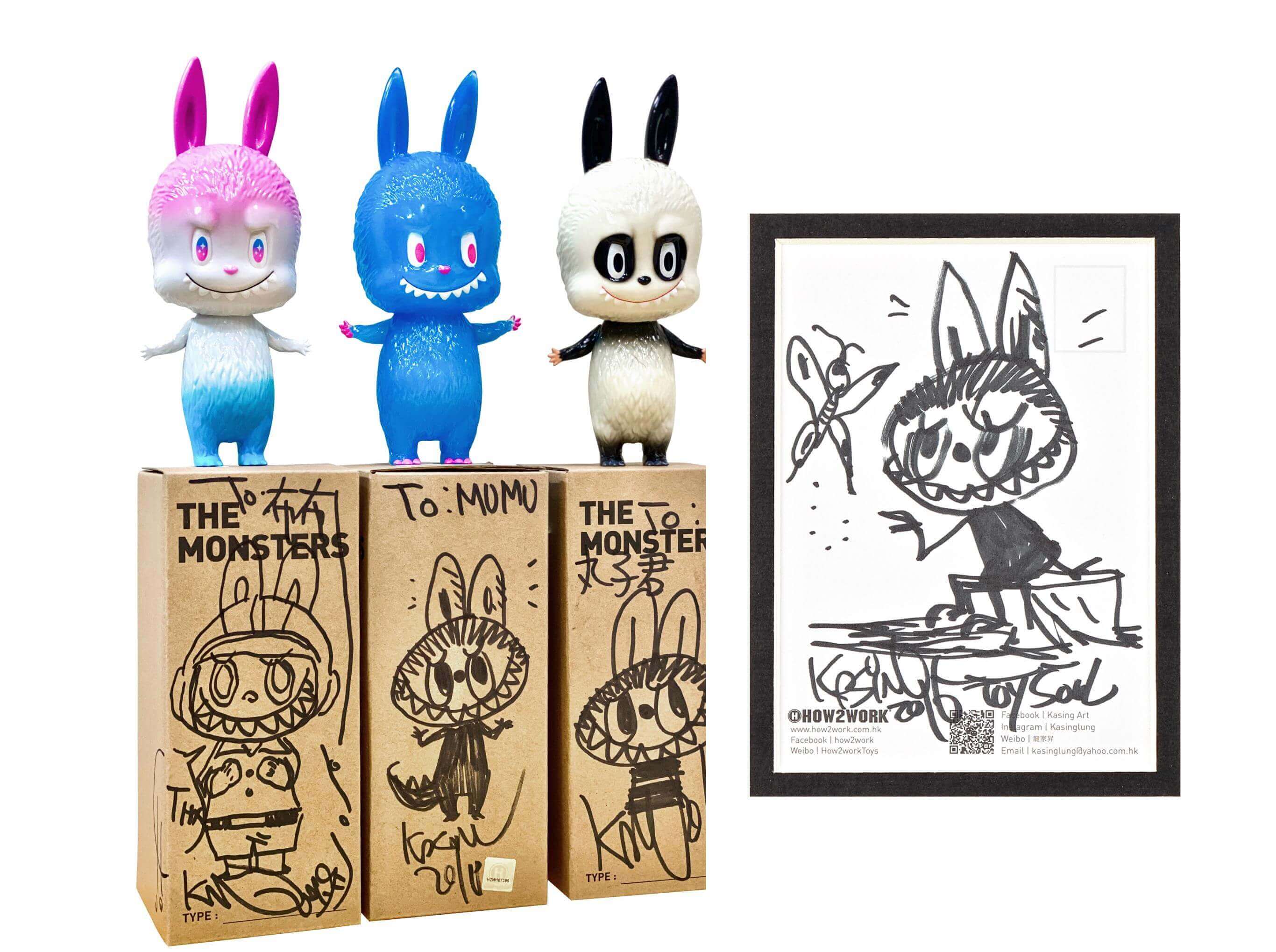